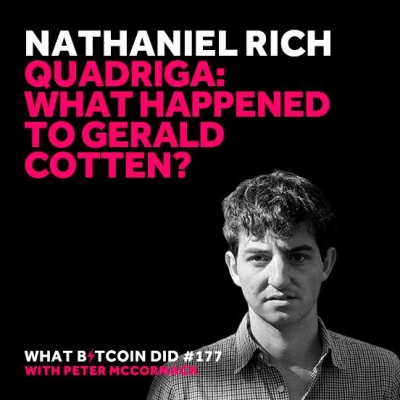 Quadriga: What Happened to Gerald Cotten with Nathaniel Rich - WBD177

In December 2018 Gerald Cotten, the CEO of Canadian crypto exchange Quadriga, was on his honeymoon in India with his new wife. While there Gerald fell sick and a few days later died from complications related to his Crohn's disease.

Gerald was the only person who held the private keys to Quadriga's cold storage wallet, leaving an estimated CA$250m ($190 US) of customer deposits unrecoverable. In January 2019 QuadrigaCX, Canada's largest cryptocurrency exchange shut down for business, filing for bankruptcy in April.

While initially it was suspected the loss was down to gross incompetence and failure to structure a contingency plan, conspiracies quickly started to circulate:

Had Gerald faked his death in India as an elaborate exit scam?

When Gerald lost $millions of Ethereum in a smart contract bug a couple of years earlier, had he used customer funds on other exchanges to try and trade his way out of this hole?

Had Gerald lost funds he was harbouring for criminal gangs and escaped to avoid repercussions?

To add to the mismanagement of funds and keys the events leading up to and following his death were equally suspicious:

Just days before the trip Gerald had signed a new will leaving his entire estate to his wife.

Following his death, Gerald's wife did not request an autopsy and removed the body from the hospital.

His death was announced on January 14th, Despite dying on December 9th.

Whatever the course of events in India, the death and mismanagement of the exchange and private keys raise many questions, and there are likely parts of the story we may never know.

In this interview, I talk to author Nathaniel Rich about his investigation into Quadriga for Vanity Fair. We discuss the suspicious death of Quadriga's CEO Gerald Cotten, the missing $250m of customer funds and the FBI's investigation.

Note: following my interview with Nathaniel, the lawyers representing the customers of Quadriga have asked Canadian authorities to exhume Gerald's body. You can read more about that here.