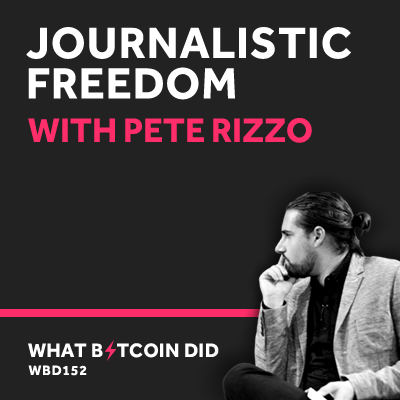 “The thing that Bitcoin is trying to achieve will only, and can only, be achieved by Bitcoin.” — Pete Rizzo

For varied reasons, not all interviews are released. I previously recorded a show with Pete Rizzo, while he was Editor-in-Chief at CoinDesk. Following the interview my show editorial went Bitcoin only but due to the topics discussed with Pete, I decided to archive it. I enjoyed our chat and following his recent departure I felt that it would be good to release the show and allow people to hear about what we discussed.

In the world of Bitcoin and cryptocurrency where everyone is an investor and has a vested interest, unbiased news is hard to find.

Now more than ever in a news environment that is driven by clicks, likes, listens and views. News organisations can often struggle to find the right balance between stories that capture people’s attention and information that is factual, important and without agenda.

So how do news organisations in the space maintain the balance between producing unbiased informative content whilst still capturing people’s attention and engagement?

In this interview, I speak to Pete Rizzo who recently left his position as Editor-in-Chief at CoinDesk. We discuss journalistic responsibilities and freedom.