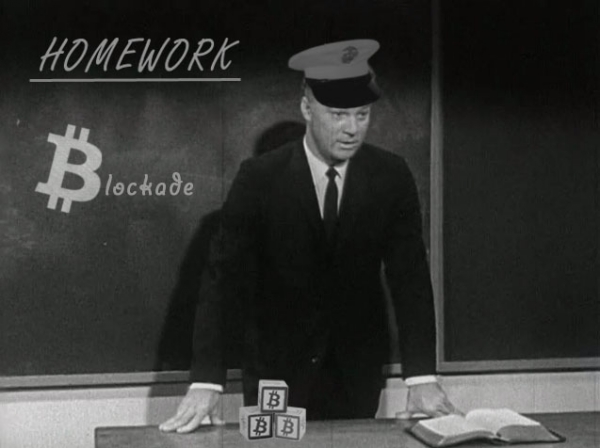 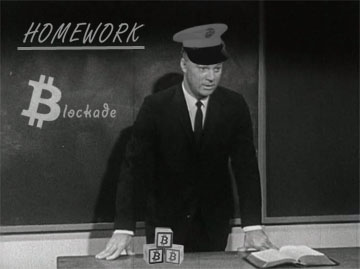 The Pentagon’s Office of Net Assessment (ONA) has assigned a research topic “Economic Warfare and Blockades” (see extract in its entirety below) to the Marine Corps University  This “homework assignment” (my words, not theirs) includes determining whether or not Bitcoin will disrupt the effectiveness of blockades and Economic Warfare:


“Consider the advent of bitcoin, dark banking, internet commerce, cyber warfare and other economic disruptions/innovations. What does this suggest for the conduct of Economic Warfare? Do they reduce its effectiveness? Do they increase its lethality? Do they change the playing field?.”


Politico’s Philip Ewing ran a piece earlier this year called “Secretive Pentagon think tank knows no bounds” where he explained that “The Office of Net Assessment, which is headed by a seldom-seen, 92-year-old Nixon-era defense analyst named Andrew Marshall, is just a tiny compartment in the labyrinthine Defense Department, but its interests are vast.”  This apparently includes studying Vladmir Putin’s Body Language (which was also reported by USA Today).


Last year Defense News reported that the ONA was going to go through a reorganization or perhaps be disbanded in “Pentagon Determining Fate of Revered Net Assessment Office." However it was also reported that House Armed Services seapower subcommittee Chairman Randy Forbes, R-Va., sent a letter to to Defense Secretary Chuck Hagel that the ONA  “has been at the forefront of the most innovative defense strategies of the last two generations.”  Paul Bracken, a Professor of Management and Political Science at Yale University seems to agree in his 2006 piece, “Net Assessment: A Practical Guide” (PDF) for The US Army War College Quarterly Parameters.


Recently we reported in Let’s Talk Bitcoin! in “Bitcoin or ‘DARPACoin’ Could Save Civilization After a Nuclear Event” that the military has funded projects such as “Remote Attestation and Distributed Trust in Networks (RADTiN) (see Bitcoin Magazine “U.S. Air Force Building Bitcoin Payment Gateway”) as well as TorCoin (which I referred to as “DARPACoin”) a new altcoin supported in part by the Office of Naval Research via Defense Advanced Research Agency (DARPA) and SPAWAR Systems Center Pacific, Contract No. N66001-11-C-4018:  A TorPath to TorCoin: Proof-of-Bandwidth Altcoins for Compensating Relays. TorCoin will be presented at the Workshop on Hot Topics in Privacy Enhancing Technologies (HotPETs 2014) at thePrivacy Enhancing Technologies Symposium on July 18, 2014 in Amsterdam, Netherlands.


Earlier this year, the Navy’s interest in Bitcoin  was widely reported on after we broke the story “U.S. Navy Preparing Bitcoin Battalion” in Bitcoin Magazine.


The assignment includes putting blockades and Economic Warfare in a historical context.  According to The impact of economic sanctions: 2nd report of session 2006-07, Vol. 2 ... By Great Britain: Parliament: House of Lords: Select Committee on Economic Affairs.(Google Books), “The use of economic sanctions to accomplish foreign policy objectives throughout history {have} been an integral component of most nation states...In antiquity and in medieval times, economic sanctions were most often used as part of a nation's arsenal during war.  Indeed, Athens imposed economic sanctions in 432 BC when Pericles issued the Megarian import embargo against Greek city-states which had refused to join Athenian-led Delian League during the Peloponnesian War."


According to PearlHarbor.org, prior to Japan’s Attack on, Pearl Harbor, “The U.S. placed an embargo on Japan by prohibiting exports of steel, scrap iron, and aviation fuel to Japan, due to Japan's takeover of northern French Indochina.”


In March, I reported for Bitcoin Magazine that the “...United States sanctionsagainst the Kremlin for annexing Ukraine resulted in MasterCard and Visa suspending certain types of transactions in Russia (apparently due to the OFAC 50% rule). OFAC or Office of Foreign Assets Control under the Department of U.S. Treasury maintains a list of different sanctions programs that it administers here.”


And further I stated that, “Bitcoin doesn’t have a gatekeeper. Fundamentally no one needs to ask permission to use Bitcoin or run a Bitcoin client making most financial blockades or sanctions at their core ineffectual.”


Topic Description: - Nations that are economically inter-dependent are hypothesized

to avoid war due to the obvious cost to their economy. Recently this idea has come into

debate, with the example of WWI as a prominent example of an exception.

embarked upon at the start of WWI. Other scholars are following; this area is current

and much talked about.

- Several defense thinkers, TX Hammes, for example, espouse a distant blockade as a

part of a China deterrence theory.


Desired Objectives of the Research: - Study historical examples of blockades and

Economic Warfare, arrive at a good definition of the two that encompasses the

other economic disruptions/innovations. What does this suggest for the conduct of

Economic Warfare? Do they reduce its effectiveness? Do they increase its lethality? Do

they change the playing field?

- What is the relationship between Economic Warfare and Conventional Warfare? Does

Office of Secretary of Defense,

Disclosure:  Author will receive LTBcoin for publishing this article