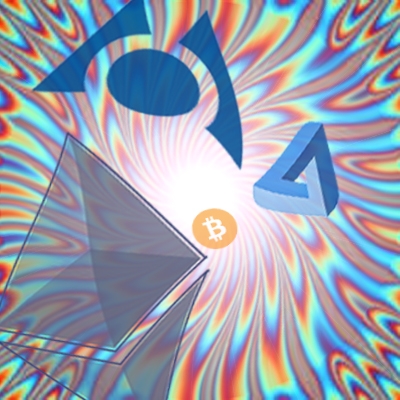 Terence McKenna's pseudoscientific timewave novelty theory predicted a significant event or innovation would occur in the year 2012 and result in a breakthrough to the interconnected complexity of the universe. Historically the theory has been highly contested due to its bold claims and that fact that its inception is tied to McKenna's experiences with magic mushrooms (psilocybin) in the Amazon during the 1970s. Regardless of one's attitude towards his theories, it is undeniable that McKenna's contributions draw vibrant parallels to the inception and potential application of blockchain technologies and decentralized autonomy. Could McKenna have prognosticated both how and when these innovations would ascend into existence or is this simply a case of fantastic imagination and coincidence? 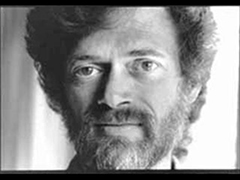 Graphic 1.0 Terence McKenna was a prominent philosopher, author, and speaker from the 1980s through 2000. His subjects included psychedelic drugs, shamanism, technology, culture, and creativity.

McKenna on Innovation and Memes

In his famous lecture Opening the Doors of Creativity McKenna prophetically described the method by which the innovation of blockchain technology would come to existence by drawing parallels to nature.

Biology runs on genes and genes are the units of meaning of heredity. A word has been invented, meme. A meme is the smallest unit of meaning of an idea. Ideas are made of memes. - Terence McKenna (1990)

This statement impressively describes the collaborative nature of humanity at a time pre-dating the extreme interconnectedness of the modern internet age. Bitcoin is the product of a vast array of memes contributed via mediums including educational instruction, professional collaborations and internet forums such as GitHub. Akin to biological genes, Bitcoin's notable memes include the python programming language, Adam Back's famous hashcash cost function, the SHA-256 algorithm and elliptic curve cryptography. Harnessing this pool of thought, the pseudonymous Satoshi Nakamoto conceived an elegant innovation which would serve as the building block for even more complex creations, the bitcoin core protocol.

In this way, McKenna clearly described the method by which a more complex idea would come into existence--ideas build upon other ideas to generate an even more complex and innovative future. The question that remains is whether or not blockchain technology may also play a role in proving McKenna's timewave novelty theory correct?

The foundation of McKenna's most prominent theory is built upon the King Wen I-Ching hexagram sequence, part of an ancient Chinese text known as the Book of Changes. When observing the sequence of hexagrams McKenna observed a pattern and plotted it, eventually deriving an even more complex sequence which he would call the "timewave." This timewave could be extrapolated from the estimated beginning of time and would repeat the pattern at increasingly rapid intervals. As displayed in graphic 2.0 the y-axis indicates a scale where higher peaks represent periods of habit and dipping valleys represent periods of more dramatic novelty (change and complexity). Stated more simply, it was believed the timewave could display the increasing or decreasing levels of complexity of the universe over time with the downward trend indicating that the universe would become more and more complex in the long term. McKenna argued that specific increases (peaks) and decreases (valleys) in the plot of the timewave could be correlated to observable events throughout history, the present, and potentially the future. Charts including some of his correlations can be viewed here. 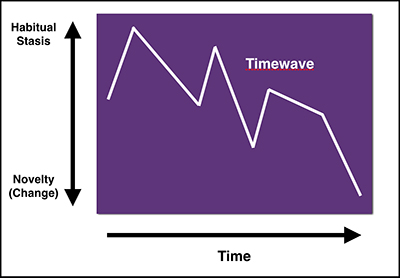 Graphic 2.0 A generic timewave plot. When charted over time the trend is downward distinctly towards increasing change and complexity.

Inevitably the timewave's downward slope would intersect zero on the y-axis. Known as "timewave zero" this point was predicted to occur in 2012. McKenna stated that this point would indicate a singularity that would be marked by a significant event. The belief that 2012 is in fact timewave zero is contested by many. Furthermore, no popular event has been identified as the seminole event of novelty. This leaves to the realm of possibility that blockchain technology and decentralized autonomy represent the singularity McKenna foretold that could catalyze an escalation of complexity across the universe.

For a more thorough description of the timewave novelty theory click here to hear it from Terence McKenna himself.

Wait, What Is the Singularity?

The concept of the singularity describes the hypothetical tipping point in the history of the universe where intelligence and technological capability begin accelerating at an irreversible rate towards presently unimaginable levels of sophistication. Modern theories surrounding its manifestation most often involve the application of artificial intelligence that could leapfrog the limits of human endeavors. French mathematician and philosopher Nicolas de Condorcet is commonly credited as being the earliest proponent of the concept of singularity as early as 1794.

Nature has set no term to the perfection of human faculties; that the perfectibility of man is truly indefinite; and that the progress of this perfectibility, from now onwards independent of any power that might wish to halt it, has no other limit than the duration of the globe upon which nature has cast us. - Nicolas de Condorcet (1794)

One interesting aspect of the debate surrounding singularity is the attempt to identify particular breakthroughs that constitute this tipping point. Some people argue the dawning of human self-awareness was the singularity that catapulted newly-intelligent life into an ever-accelerating journey towards technological sophistication. Others argue that the moment of singularity was when primates first used tools, as famously illustrated by the opening scene of Stanley Kubrick's film 2001: A Space Odyssey. Then there is the possibility that a singularity has not yet occurred, but that spectacular forms of genius might someday emerge through experiments in computer science and artificial intelligence. I would suggest that the short duration of human history and the scale of what the singularity encompasses make it difficult to specify.

Graphic 3.0 Famous scene from Stanley Kubrick's 1968 classic 2001: A Space Odyssey. A popular interpretation of this scene, depicting primates' first use of a bone tool, is that this moment represents the the dawn of humankind.

Another intriguing possibility is that the concept of decentralized autonomy could allow the human race to achieve a singularity without the involvement of artificial super-intelligence, but rather through a more novel framework of human interaction and collaboration equating a hive mind.

The Ascent of Decentralized Autonomous Organizations

It is within this realm that Terence McKenna, were he alive today, may have found his singularity. In the eyes of the most progressive developers involved in blockchain-based projects, DAOs may represent the beginning of a solution to a fundamental problem for all of humanity: how do we act as individuals while also contributing to the benefit of the whole? Modern societal structures, though functional, are imperfect and frequently fail to consider the needs of the many over the few and the future over the present. Decentralized systems built upon blockchain technology are giving the world its first glimpse of a future where incentive schemes and systems are possible to provide the motives for rational self interest while contributing to the mutual benefit of the whole without the need for seemingly archaic centralized powers to fallibly provide the rules and direct the path. In this way, decentralized autonomy could enable a paradigm where actions are wholly incentivized by ideas and not minority interests.

It seems unlikely that McKenna accurately predicted the advent of decentralized technologies. His theory did not specifically mention the blockchain or decentralized autonomy. Furthermore, correlation is not causation, and the fact that events like blockchain technology's debut occur along a timewave does not prove that the timewave and the technology are related. Regardless, it is hard to dispute the foundation of McKenna's theory--that the universe is becoming increasingly complex. It is, however interesting that McKenna's prediction of the 2012 singularity fell within 3 years of the dawn of the blockchain, a technology that may be the foundation for the future's most promising decentralized innovations. I would argue that decentralized autonomy provides a new paradigm for humanity and the universe with unknown limits, comparable to such ethereal concepts as the dawn of life and the genesis of self-consciousness.