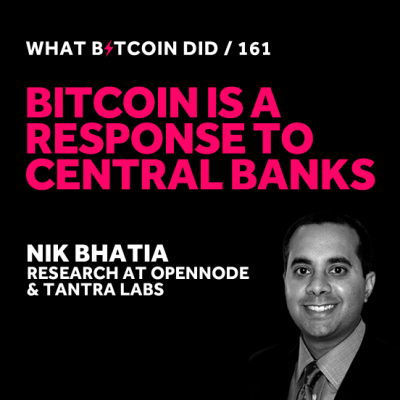 Nik Bhatia on Bitcoin is a Response to Central Banks - WBD161

“The reason why I love Bitcoin; I think that it improves on all the things that gold is lacking and gold really is, historically, the world’s best money.” — Nik Bhatia

State adoption of Bitcoin is unclear but countries such as Iran, North Korea and Venezuela are believed to be holding and using Bitcoin. While these countries are in the minority, some believe it is just a matter of time before Bitcoin becomes a generally accepted state-level monetary tool.

State-level censorship resistance is useful for nations subject to tight sanctions. The unique properties of Bitcoin could make governmental ownership of Bitcoin a necessity in the future and increased accumulation by governments around the world may lead to the U.S Dollar being replaced by Bitcoin as the global reserve currency.

Further, the global economy is becoming increasingly uncertain, with negative interest rates and the Fed's growing intervention in the repo market standing as warning signs of an imminent global recession.

Could all these factors speed up the shift towards Bitcoin adoption?

In this interview, I talk to Nik Bhatia, Research Strategist at OpenNode and Tantra Labs. We discuss how banking works, the global economic outlook and why Bitcoin is a response to centralised and monopolistic money creation by central banks.