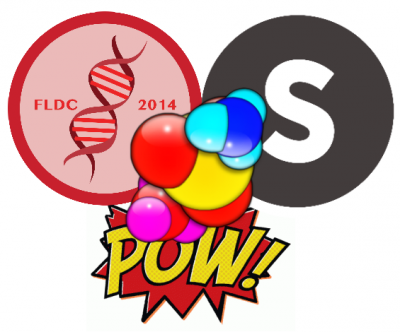 Written by the FoldingCoin Inc Team

On February 5th, 2015 FoldingCoin Inc. is introducing Merged Folding to our platform. This allows other cryptocurrency projects to partner with FoldingCoin, sharing our distribution platform in combination with the LTB asset distributor. These projects can distribute based on the [email protected] (FAH) folding work performed by their members. Please go to http://foldingcoin.net/ for complete details if you are not familiar with FoldingCoin (FLDC.XCP).

So why should a token or Altcoin distribute their tokens on the FoldingCoin platform rather then have their own blockchain?

To answer this, lets get an understanding of how grid computing is measured

There are two common forms of computational measurements that are used in grid computing:

There is no direct translation from one to another, but a common consensus, for the sake of comparison, is that 1 hash is equivalent to 12,700 FLOPS. The FAH grid computing network has 46 PetaFLOPS and is known as the world's most powerful computing network outside of the Bitcoin mining network.

So how much computational power was put into early bitcoin mining with PCs?

At the time before ASICs and FPGAs started hitting the market in December 2012, the Hash rate of the Bitcoin network was at 26 terahashes from mostly GPU and CPU power. Based on a rough comparison (12.7 petaflops = 1 terahash) the computational power in legacy mining equipment is:

Imagine if that power was harnessed for molecular protein folding. Most of this power was redirected to altcoin mining after the SHA ASICs came out, since there was no profit motive for folding. FoldingCoin looks to bring a profit motive for people to fold proteins by distributing FLDC along with other Counterparty tokens.

Venture capitalists could see this as an opportunity to invest in the creation of economic sized Anton Supercomputer, which is an ASIC molecular protein simulating machine that can fold more efficiently than standard computing hardware. This very thing happened to Bitcoin mining when it became exponentially profitable: venture capitalists invested in the creation of ASIC miners to compute SHA256 at a more efficient rate than standard computing hardware.

The value of Merged Folding

Value in earning tokens as a bonus - Coins and tokens can have a hard time in gaining mining adoption as many are not worth much, maybe only a satoshi or two. Few miners will mine something that does not provide an immediate return, as most are in it for the profit and not necessarily the coin itself. Being on the FoldingCoin platform allows tokens to distribute to an already established folding community to receive its tokens. And should the token fail, the folders will not mind, because they are still receiving FLDC and other future assets by folding.

Value for helping small startup coins - Devs of smaller startup coins spend most of their time trying to maintain a blockchain. Updating and securing a blockchain is a full time job should you want your coin to succeed. Many have neat ideas of having a coin used for something other than pumping and dumping. Will they all succeed? That depends on the dedication of the development team. But what our platform will empower is the ability for tokens not to have to maintain a blockchain anymore. Time can be focused now solely on the mission of creating a token with a use and to start working on features as well. They can now be more directly involved in their tokens community rather than QT wallet and source code.

Value for crypto - Miners are constantly mining different coins. All sorts of crypto-switching programs can retarget mining equipment every 10 minutes at the most profitable coin. Then instant sell outs for bitcoin occur as the miners just want an immediate profit. This is not a system in which a coin can become established. Many miners probably don't even know what they are mining the majority of the time. Since folding requires FLOPS not hashes, it is very hard to switch back and forth between the two. Also the FAH client is only partially open sourced, so coding something that would make the FAH client stop, so mining could begin, is currently impractical for the average Miner.

Value for miners - Receiving more than one coin is a dream come true for a miner. If you had a single platform that allowed you to receive many coins, that could be even better. With FLDC being the flagship token, all participants will receive this token from us regardless of the success or failure of other tokens on our platform. This allows miners (now also folders) to receive many coins that they can sit on.

Value for mining cost - If you have ever mined (with CPU or GPUs), you are aware that hashing takes a drastic amount of energy and cooling in order to keep the chips from roasting. [email protected] and FLOPS do not nearly get this hot. About half the electricity is necessary, since a different kind of computing cycle is used -- one that is not trying to brute-force a hash. In many cases, cooling systems may not even be required for folding.

How does FoldingCoin Inc. plan to allow other coins to use this platform?

James Sewell, the lead developer at FoldingCoin Inc, has restructured our calculation platform to allow other Counterparty assets to be distributed using our system in combination with the Let's Talk Bitcoin distribution platform.

This will allow other Counterparty asset developers to distribute their token to participants via a mining-like activity. This does not change the way one receives tokens in the sense that they still use CPUs and GPUs, but rather it allows the development team to focus on token applications, economics, and redirecting energy used in blockchain hashing towards more societally beneficial activities.

See our comparison between traditional mined altcoins and FoldingCoin for more details.

FoldingCoin Inc. uses PHP code running on a commercial hosting provider to calculate how many FLDC tokens to award to each folder. The code is open sourced on github. For more details on the distribution method, please visit our distribution page. Here are the basic two steps to start folding and earn tokens:

And that's it! Since FAH has been developed for almost 15 years, the process is as simple as installing a simple program. Unlike mining programs that can be very confusing for the non technical person, FAH makes it simple for anyone to begin folding. To receive tokens on the FLDC platform, you simply need to make your FAH donor name one of the following:

SCOTCOIN - Scotcoins motivation is to empower the Scottish people with an alternative digital currency opportunity, which may be used as a medium of exchange, should the need or wish arise.

POWC - Powcoin is looking to become the cryptocurrency for the comicbook world.

Dev teams looking to use our system will maintain control over all aspects of their token. We just provide the means to distribute. We could customize the following features:

If you like the sound of this and have a project that uses a Counterparty asset but are not sure how to distribute, please contact us, we would love to get you started. For completed information please visit the merged folding page on our website.

All tips and earned LTBcoin from this article will go towards the development and distribution costs for FoldingCoin Inc.