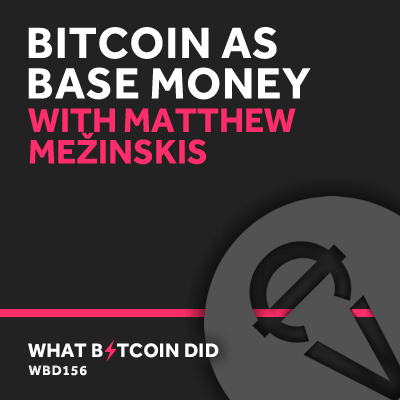 Matthew Mežinskis on Bitcoin as Base Money - WBD156

“I would not deny that purely an ideological reason of keeping a currency decentralised, out of the hands of any government is absolutely a top reason why I would hold it, and a benefit would probably happen where it would accrue value anyway.” — Matthew Mežinskis

The monetary base is the amount of currency in any one country. It is a combination of both the circulating supply and money held in reserve at the central bank. In the 1900s, the global base currency was gold; however, in 1971, the U.S severed all ties with the gold standard and the monetary base changed to being government-issued fiat currency.

In a government-issued fiat-based monetary system, the government controls the printing and inflation of its currency. This allows governments to increase the monetary base at will. Whereas previous base money, gold, was hard to inflate, with fiat money it is easy. This leads to, for example, the U.S global base money rising from $100 billion to $19.2 trillion since 1970.

With Bitcoin, however, issuance and supply are fixed. There will only ever be 21 million created, with the issuance dropping every four years and no ability to inflate the supply. Could this lead to Bitcoin becoming the next global base money?

In this interview, I talk to Matthew Mezinskis from CryptoVoices. Matthew explains what base money is and if Bitcoin will ever become the worlds base money. We also discuss what money is, the gold standard, central banks holding Bitcoin and decentralisation.