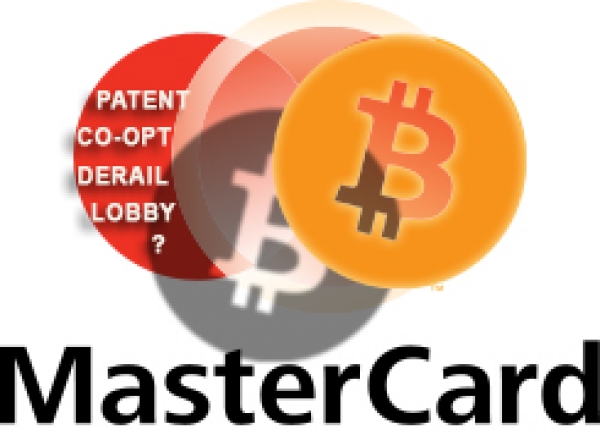 The LTBCOIN Crypto-Rewards Program is on! If you'd like to recieve LTBCOIN for reading or commenting on this article, please log-in and make sure you have your Counterwallet.co address entered 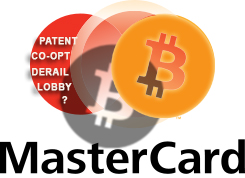 
The technology was invented by Jennifer Dogin, Vice President, Emerging Payments, E/M Commerce MasterCard and Brian Maw who was at the time Sr. Consultant –Emerging Product Development with MasterCard and the application is assigned to MasterCard.


The subject application has twenty claims.  Five and six which are similar and which I have combined as follows:


“The payment interchange of claim 2, wherein the non-traditional modes or sources of payment can be ...{or} ‘are selected  from the group consisting’... barter, virtual currency, bitcoin, social media credits, automated clearing house (ACH), and coupons.”


The application further explains how the technology works:


“...The API framework provides the capability to link to other wallets and allow the ability to pay with wallets such as MasterPass, Google wallet, PayPal, C-SAM, ISIS, Amazon payments, V.me, and the like {each of which are Trademarked by their respective owners}. The API can also support an interface to accept non-traditional modes or sources of payment such as Amazon virtual currency, paying with rewards points, bitcoin, virtual card numbers, and the like...”


According to Julian Hattem of The Hill in the April 29th article “MasterCard lobbying on digital currency bitcoin,” lobbying firm Peck Madigan Jones has five lobbyists focused on “Bitcoin and mobile payments” on behalf of MasterCard.  As an interesting side note, (and self promotion I suppose) the graphic used for Mr. Hattem’s story was created by me for Bitcoin Magazine’s booth at NYC Inside Bitcoins tradeshow.

including an article from March of last year, “Bitcoin, Sovereigns and the End Times” which called Bitcoin a “...digital scrip with nothing behind it but the full faith and credit of everybody else using it is preferable to currencies issued by sovereigns...We’re in uncharted waters;” and most recently,  “Peer-To-Peer Needs Peer Evaluations.”


Another metric used to gauge Bitcoin’s adoption are the Daily Transaction Volume and Quantity by Coinometrics.  MasterCard and Visa are at the top of the leaderboard.  However, using a snapshot of Coinometric’s data, Reddit user dstanchfield noted on November 18th, 2013 that “Bitcoin Just Passed Western Union in Transaction Volume.”


Bitcoin which is open source software hosted on GitHub (and previously SourceForge) is often at odds with those who attempt to patent technology interfacing with the Bitcoin protocol.  This tension between intellectual property and open source was recently highlighted by Elon Musk, co-founder of PayPal and CEO of electric vehicle manufacturer Tesla.  In a blog post on Tesla’s website on June 12th entitled “All Our Patent Are Belong To You," Musk stated that “Yesterday, there was a wall of Tesla patents in the lobby of our Palo Alto headquarters. That is no longer the case. They have been removed, in the spirit of the open source movement, for the advancement of electric vehicle technology.”


Almost a year to the day, Let’s Talk Bitcoin published “BitBills Attempt to Patent Physical Bitcoins” and the Bitcoin community was up in arms about the matter.  Other notable patent squabbles include CoinSigner which apparently shelved its application for its “Dispute Mediation Service” which was announced in September of  last year. However, the Coinsigner website has not yet removed reference to application "61859313" …”intellectual  property being claimed, the idea behind coinsigner is a unique external system that improves and enables things that were not previously possible in bitcoin and other alt coins. It is important to note that the idea is new, unique and un-obvious combination of processes of doing things that is protected as a defensive measure. Not anything invented by the core developers.”


“That's garbage. I described exactly the system you are suggesting back in 2011 and there is documented evidence to prove it. By attempting to patent something that is not only obvious *but actually described on the Bitcoin website* you are at serious risk of [redacted]. I suggest you revoke your application, or else members of the Bitcoin community will invalidate it for you.”


“On behalf of the bitcoin community and Mike Hearn's advice... My whole motivation was to build a company who's decisions are affected by a multitude of people passionate about the core bitcoin ideals. The scenario of the patent belonging to someone else is a very valid point raised by Mike Hearn and its a very common scenario that I have not thought about... It wouldn't make sense to go against the general consensus of the very community I am trying to contribute to. Also it is a provisional patent application, so it has an expiration date of 1 year. So being that the community has spoken, it only makes sense to let the application expire. If any possibility of the future threats from financial services I described become real, then I think the prior art argument applies because this issue is very public at this point…”


While BitBills and CoinSigner received heat from the Bitcoin community, one has to wonder what kind of backlash if any MasterCard will receive for its application.  Some might hoot and holler that the application is overly broad but I don’t foresee any individual stepping up to the plate in a similar fashion to get MasterCard to rescind their claims.


One organization that might have the answer is the Cryptocurrency Defense Foundation.  The foundation which began in April of this year describes itself as a “not-for-profit organization” and  “Cryptocurrency Defensive Patent Aggregator.” In the spirit of Elon Musk’s Tesla it aims to “acquire cryptocurrency related patents and license them openly to all those who agree to not enforce their patents against other members of the community.”  The foundation is supported by donations but appears to have received only one (bitcoin) donation on June 18th in the amount of 0.001 BTC or approximately 60 U.S. cents.  Perhaps the Cryptocurrency Defense Foundation could become a tour de force by engaging the Bitcoin Foundation with its impressive bitcoin warchest or becoming a Committee within the foundation?


Back to the Future


“Credit Cards weren’t designed for the Internet” said Tony Gallippi, CEO of BitPay in a 2012 interview for the Economist in “Monetarists Anonymous.”  In a very timely (prophetic?) and recent interview with CNBC “BitPay's play to replace Visa & Mastercard,” as noted by Daniel Cawdry for CoinDesk article “BitPay CTO: Visa and MasterCard Will ‘Leverage’ Bitcoin” Stephen Pair, Chief Technology Officer of BitPay said “When we were first contemplating this business, we looked at what it would take to solve the payment fraud problem with credit cards, which were designed in the 1950s. Our conclusion was that you would end up reinventing bitcoin,” and further “If and when Mastercard and Visa do get into the space that they would actually leverage the Bitcoin technology rather than directly compete with it.”


In “Paypal's Anonymity Play” Let’s Talk Bitcoin discussed how Credit Coins (a.k.a Identity Coins), the pre-cursor of today’s credit cards were popularized around the turn of the twentieth century. These coins were small metal tokens with the coin holder's account number engraved on them and served as identification of their account in department stores.  We also delved into the first identity theft crimes such as that featured by Evening Public Ledger on August 10, 1922, “Arrest Cabaret Singer: Girl Accused of Using Credit Coin Without Authority."  At their core, it appears that credit cards have not fundamentally changed since this time.


Indeed this belief that credit cards are an antiquated technology has been adopted by the Bitcoin community at large and has gathered steam since Target’s data breach. Articles by Alec Liu of Motherboard entitled “Would Bitcoin Have Prevented the Biggest Credit Card Theft in History” and Timothy B. Lee’s piece for the Washington Post “Credit card security is broken. Here’s how Bitcoin could help fix it” seemed to have struck a chord.


MasterCard doesn’t appear to be “leveraging” Bitcoin technology so much as it is hedging itself if the Bitcoin goes mainstream (let’s also remember that Bitcoin is still “beta” technology). MasterCard joined the “Better Than Cash Alliance” last September with a “$1.5 Million Grant Adds Momentum to Global Movement to Empower People and Grow Economies by Shifting from Cash to Electronic Payments” while Bitcoin has been heralded by the Bitcoin community and Let’s Talk Bitcoin co-host Andreas M. Antonopoulos (and even the Federal Reserve) as a silver bullet for the unbanked and international remittances (even while it has taken flak from World Bank associated CGAP).


“Bitcoin is not just digital currency. It's Napster for finance.”... Well it’s the the BitTorrent of finance but don’t tell Mr. Morris! However, I am indeed reminded of Napster.  BMG was suing Napster while its parent company Bertelsmann AG “announced plans to develop a service for swapping and sharing music.” Talk about playing both side of the fence!

Credit Cards which allow chargebacks are in a sense more consumer friendly than Bitcoin which at its core is an irreversible transaction. If credit card companies are reeling from recent Consumer Financial Protection Bureau (CFPB) enforcement actions... “The Consumer Financial Protection Bureau, or CFPB, the federal consumer watchdog, has demonstrated that its bite is as big as its bark when it comes to credit cards” as reported by Janna Herron in Bankrate.com article, “The CFPB's agenda for 2014”.   One has to wonder how the CFPB will adopt the recent (Published: May 29, 2014 / Publicly Released: Jun 26, 2014) recommendations of the U.S. General Accountability Office (GAO) “VIRTUAL CURRENCIES: Emerging Regulatory, Law Enforcement, and Consumer Protection Challenges.”


It will be interesting to see how companies such as Xapo Bitcoin Debit Card evolve (and should be rolled out just about the time this article goes live.  Xapo which announced the card back in April stated that “The payment network (Mastercard, Visa, etc.) that will be used by the Xapo debit card is not yet determined and will depend on the bank. There is no relationship between Xapo and the payment network; rather there is a relationship between Xapo and the card-issuing banks.”  CoinKite began shipping a “Bitcoin Debit Card” in December 2013 and claims to be the “1st Bitcoin Debit Card:” “Finally spend Bitcoin and Litecoin Easily! With our Debit Card you won't need to remember to charge your phone. FREE Card included with monthly paid accounts…”  At one time BitInstant appeared to be creating a MasterCard linked Bitcoin Card and I discussed some of my reservations about combining a Credit Card number with a Bitcoin Wallet in the previously referenced article “PayPal’s Anonymity Play”  which also discusses the need for disposable credit cards and credit card numbers.


Will MasterCard derail, co-opt, leverage, litigate, and/or lobby against Bitcoin?  Will Bitcoin become the Napster of Finance?  Your guess is as good as mine.  Stay tuned.


Disclosure: Author of this article may be compensated and/or tipped Bitcoin and/or LTBCOIN for writing this article.

The LTBCOIN Crypto-Rewards Program is on! If you'd like to recieve LTBCOIN for reading or commenting on this article, please log-in and make sure you have your Counterwallet.co address entered