Have a question? Want to advertise? Something else? Contact us: [email protected]g 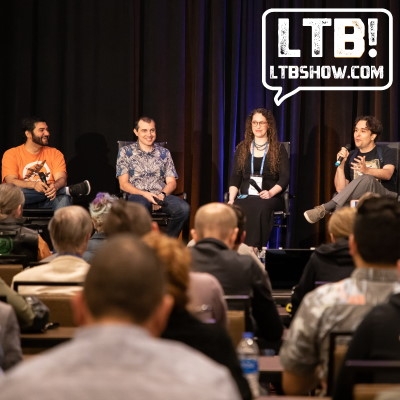 Andreas M. Antonopoulos, Stephanie Murphy, Jonathan Mohan and Adam B. Levine are back with part two of our recent live show recorded at BTC2019 in front of a studio audience. This time, we've got nearly an hour of audience Q&A. Enjoy the show!

This episode was sponsored by edge.app

On Today's Episode, Andreas M. Antonopoulos, Stephanie Murphy, Jonathan Mohan and Adam B. Levine are back with part two of our recent live show recorded at BTC2019 in front of a live studio audience. This time, we've got nearly an hour of audience Q&A.
Enjoy the show!

This episode was sponsored by http://edge.app

Stephanie Murphy: “Do you think Bitcoin will be able to shift from block rewards to transaction fees to maintain security as the block reward approaches zero?”

Andreas M. Antonopoulos: “This is one of the fundamental misunderstandings and dynamics of mining for most people, which is the idea that something suddenly happens sometime at an undescribed future, either at the next halving or in 2141. The truth is on a daily basis, every single miner in the industry looks at six or seven different factors: the efficiency of their mining equipment, the price of electricity in their local fiat, the cost of their operation system, the current price of Bitcoin in fiat, the reward that's available as a block subsidy, the average amount of fees they can get, and the relative proportion of hashing power. They decide based on all of these factors. Do I leave this specific machine on at its current efficiency, or do I turn it off, or do I point it to another coin? That happens every single day. Every single day that decision continues, it’s rebalancing all of these dynamic factors. So the shift between block subsidy and fees happened every single day since January 3rd 2009 and it continues to happen today.

Sometimes, the capacity of the blockchain, the number of transactions that are in there, the value of the fees mean that it really attracts miners because there's a lot of fees to take. Other times, the fees decrease, the number of transactions decreases, so they're now more reliant on block subsidy and then it swings back and forth and back and forth. It's gonna oscillate in that way all the way to 2141.

Stephanie Murphy: “What does everybody's view on Rootstock (RSK)?”

Andreas M. Antonopoulos: I don't think Rootstock is putting smart contracts on Bitcoin. Rootstock is allowing you to use Bitcoin to pay for smart contracts on the Rootstock Drivechain, which you could theoretically do by shifting money into Ethereum. In fact, recently I saw someone who had built a gateway that allowed you to make a Lightning payment that terminated in an Ethereum contract. So there's many ways to bridge different blockchains together. Quite honestly, I don't think we should be doing smart contracts on Bitcoin. Bitcoin doesn't do smart contracts, and it doesn't do smart contracts because it does security. That's not a trade off I think is worth doing. It's much better to leave that to a chain that has a much more experimental culture and can take bigger risks. As to whether we can do smart contracts, that's not a binary question; it's a question of value. So can we do smart contracts that can keep $1,000,000 secure? Yes. $10,000,000? Maybe. $100,000,000? No, the DAO proved that. How about now? DAI is doing more, so maybe yes. So it's basically a moving front. As the the maturity of the smart contract ecosystem expands, we can do bigger and bigger stakes (no pun intended) within the smart contract ecosystem. Every now and then there's gonna be a fairly catastrophic failure that's gonna cause a regression in the amounts of money that's put in them. But essentially it's growing. We're proving this every day, and it's the same thing with Bitcoin. The way you measure security in a smart contract or you measure security in a cryptocurrency like Bitcoin is how secure is Bitcoin? X billion dollars. That's the stake that is sitting on it right now, unhacked so far.

Stephanie Murphy: “If Bitcoin or crypto is going to give power back to the people, how can we help people from sanctioned countries like Iran, North Korea get access to this freedom?”

Andreas M. Antonopoulos: “[...] one of the ways we fix issues of privacy is by using the asymmetry inherent in all societies, which is generally the number of people being watched is much larger than the watchers. The panopticon works both ways. If you surveil people, they can surveil you back. Blockchains give you a really important thing, which is immutability. So for example the next set of leaks of Panama papers, what you do is you embed them in the blockchain so they cannot be erased from history. You can do the same thing with other surveillance technologies. If you want to create a situation where society moves towards protecting privacy and making it stronger, what you do is you strip the powerful people in society of their privacy and suddenly they care.”

Thanks for listening to this episode of Let's Talk Bitcoin! Content for todays show was provided by Jonathan Mohan, Stephanie Murphy, Andreas Antonopoulos and Adam B. Levine.

Music for this episode was provided by Jared Rubens and General Fuzz, with light editing by Adam B. Levine.

Transcribed highlights for this episode were provided by ProfessorMeow

Any questions or comments? Email [email protected] - See you next time.