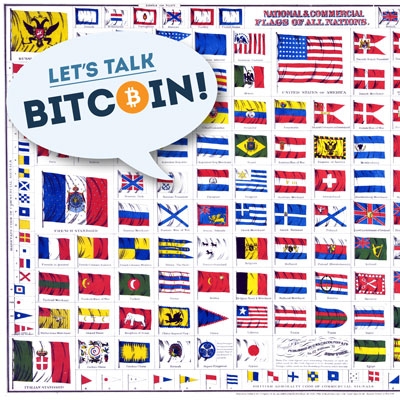 This episode was recorded several weeks ago, here is an update from Susanne on the progress they've made in that time.

BITNATION Update, since the day of recording the episode:

A multisig address have been set-up on 3 cold storage devices held by 3 different persons, according to the original 2-phase plan. CounterWallet integration of the multisig address is a challenge as CounterParty is still testing the multisig function for security reasons before releasing it. Its unclear when their security audit will be finalized. In the meanwhile, we will regularly transfer funds to the multisig storage instead. The address is 3KS6AuQbZARSvqnaHoHfL1Xhm3bTLFAzoK

Financial projections can be found here - its currently being circulated within the community of interest, until weve updated the website frontend. Earlier versions of the financials projections had been circulating on our Skype chats and on our Facebook page for about 2 months, for community review and input.The entire website frontend will be updated by the end of next week with an improved sales process interface, team section, business plan, financials, Ambassador section, media section, etc.

Additional updates: After having expanded the imagination of what the blockchain could be used for with our Blockchain Wedding on October 5th, on October 24th we did another amazing event: a live demonstration of the Bitnation BlockchainID in London. It was super exciting! Christopher Ellis developed the concept and we organized the event together. You can watch the video from Crypto World Networks and you can see the tutorial here

The best part of it is that its a very simple process, that people can do even if they dont have a huge amount of tech knowledge -- which is ideal in areas in the developing world where our services are needed the most. As someone whove spent half a decade in that sort of areas, from Afghanistan to Libya, and many other places, as an entrepreneur providing research and analysis of various aspects of governance, I know how sorely practical and voluntary solutions are needed. Which is why our next project is even more exciting: a land registry/ deed pilot. More information will be posted about it on our Facebook and Twitter feed in the following two weeks.

Another upcoming project, is implementing the beta version of Swarmops through our Ambassador Network. Since the start of Bitnation, weve been using Rick Falkvinges Swarm model, outlined in the book Swarmwise Its the same model that was used to build the Pirate Party, which spread to more than 70 different countries -- which is a perfect fit for our Ambassador Network model -- very much one of the core USPs of Bitnaiton. To that end, were also going to integrate the Swarmops program (link here: https://github.com/Swarmops/Swarmops) to empower local entrepreneurs and activists in our network.