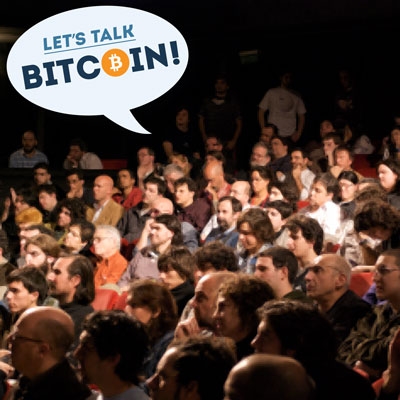 Let's Talk Bitcoin #143 From Up Close

We kick things off at Porcfest 2014, Stephanie moderates a wide ranging Women in Bitcoin panel featuring Paige Peterson, MK Lords, Tatiana Moroz and Lynn Ulbricht. This panel occupies the first half of the show.

Then, Editor-in-Chief of American Banker Marc Hochstein recently caught up with Charlie Shrem onstage at their first cryptocurrency event. They talk felonies, assumptions, and the burden of compliance on founder dependent startups.

And finally we take a step back from the obviously cryptocurrency and think a little different. At yesterdays Techcrunch Disrupt there was the obvious point of excitement around Braintree and thus Paypals upcoming acceptance, but there was another talk you might not have heard about that struck a chord with me. If all you want is bitcoin, don't listen to the final conversation between EV Williams, Walter Isaacson as moderated by Matthew Panzarino.

If you like this episode, send Bitcoin or LTBc to this address and if you want to emphasize that THIS was a valuable episode enter the show number (143) as the last three digits.