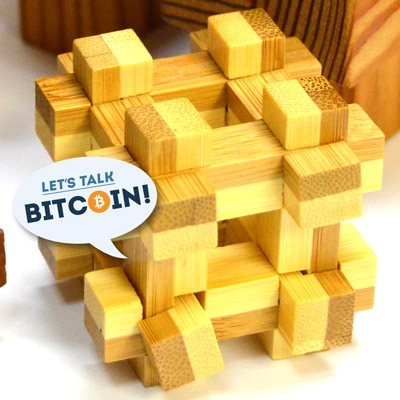 Stephanie interviews John Ratcliff (codesuppository.blogspot.com/) about his on-the-blockchain trivia games. Visit LetsTalkBitcoin.com to to try out John's puzzle, it'll be posted shortly after this episode.

Tim Swanson hears from Manu (and Gary) about the hunt for fairer distribution systems, proof of human and the bitcoin in Bali.

TRIVIA ON THE BLOCKCHAIN

The first is really quite simple, but it demonstrates a puzzle which must have exact punctuation and capitalization.
It is in the form of a Jeopardy style question.
The clue is: "The name used by the creator of bitcoin, the falsely accused inventor of bitcoin, and the likely actual author of bitcoin."
The answer begins with "Who are" and uses full names, capitalization, and punctuation including the question mark at the end.  To get the prize it must be exactly perfectly formed as the brainwallet seed.
The correct answer, when fed into www.brainwallet.org, will give the winner the private key to retrieve the funds.
Here is the link to the clue:
https://blockchain.info/address/13JSmKYWrbpf1TYVtmm6mgzcSEAavzTCdQ
The prize is 10mbtc.
The second is a scavenger hunt with 10 movie themed trivia questions.  We should credit Sophie Kirschner for coming up the questions.  These are intentionally very hard and designed to defeat any attempt at a Google search to answer them.
The first trivia question is:
"Who thought she said 'what'?"
All answers are a single word and are all lower case.  If the answer is a person or character name, then just the character's last name (lower case) is the answer.
Once you answer this question correctly you will be able to retrieve the prize and it will lead you to the next clue.  As stated on the program, since this is just a single word answer the prize was already snarfed by a bot.
The correct answer leads to this public key and the clue to the second trivia question:
https://blockchain.info/address/1iK1fFerViymSfxx2rUC1xkVNvfFzTLHi
When someone gets the answer to this question to find the next one, they should use as the brainwallet: "answer1+answer2", with the '+' as part of the brainwallet key and so on.  The brainwallet key to get the final reward will be in the form of "answer1+answer2+answer3+answer4+answer5+answer6+answer7+answer8+answer9+answer10"
There are ten questions.  The prize for answering the first one is 1mbtc, the second 2mbtc, and so on.  The answer to the final question has a 20mbtc prize.  The total prize payout for this scavenger hunt is 65mbtc (around $40 USD).
These questions are, quite intentionally, very, very difficult. If I see that people are getting stuck in the scavenger hunt for a long period of time then I will provide clues by sending additional transactions to the address of the question they are stuck on.
Back in March when I was setting up these games I wrote an extremely detailed article about how to play them.  The article can be found here:
http://codesuppository.blogspot.com/2014/03/bitcoin-brain-wallet-scavenger-hunt.html

Thanks for listening to episode 128 of Let’s Talk Bitcoin! Content for todays show was provided by Adam B. Levine, Tim Swanson, Stephanie Murphy, Gary and Manu

This episode was edited by Adam Levine and Denise Levine

At Letstalkbitcoin.com we’re cranking out content like crazy, the writer interface is available to anyone with an account and we immediately were flooded with more content our system could properly deal with. Andrew from the upcoming CryptoForChange blog has taken over as managing editor, and we’re designing the new editorial system. Head over to the forums to check it out and join the conversation, or get involved!

We’re in full development mode! Things are changing quickly on the site, giving a post or comment a “like” now rewards the recipient with a small amount of Proof of Participation. Each week, all the proof of participation points are added up and then the total amount of LTBcoin that are awarded to the audience are divided based on each community members participation.

So that means that giving someone a like is sort of like nudging the game just a little bit in their favor. You can only like any post a single time, and every time you do that person has their Participation score improved a little which increases their share and reduces it for everybody else.

I’m taking the time to explain this to you in detail because I’d like you to recognize that it is a nice thing to do for a person, but it also comes at a cost to the community. So have fun!

We have some development roles where you can help us build the platform out faster and secure your stake of LTBc while they’re new and poorly understood. Thanks for listening