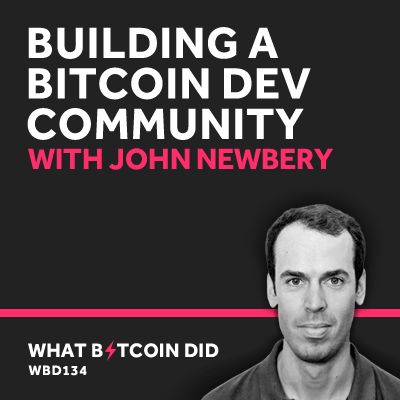 “If Lightning is Layer two and Bitcoin is Layer one, then Layer zero is the people using and building Bitcoin.”

As an open source initiative, Bitcoin does not have a central fund to pay developers. Instead, it relies on a community of committed devs and a core group of companies and Bitcoin philanthropists to fund them. One of the companies leading the way in providing a platform for these developers is Chaincode Labs.

Every year, Chaincode Labs runs a Hackers Residency which allows people from all around the world to come to New York, connect with developers and work on Bitcoin.

In 2016, John Newbery quit his job in telecoms and took a spot on Chaincode Labs first residency. Following a successful four weeks, he was hired to work full time as a Bitcoin Developer at Chaincode. Since then John has dedicated his time to working on the Bitcoin Protocol, Lightning and building a community for Bitcoin developers by running the residency program for Chaincode.

In this interview, John explains what it is like working on the Bitcoin protocol and with other core devs, the risks of a reducing block subsidy for miners, privacy and development on the Lightning network.

Bonus: I also hear from 3 of the current residents on the Chaincode program. They tell me about their diverse backgrounds, how they ended up in New York, and what they will be working on once the residency is over.