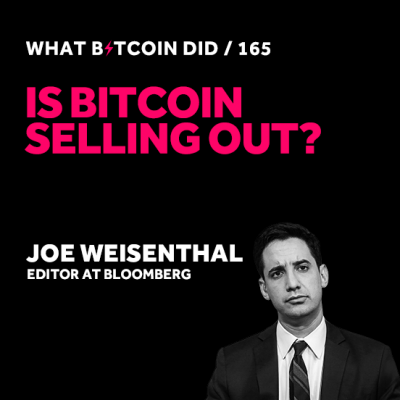 Is Bitcoin Selling Out with Joe Weisenthal - WBD165

The Winklevoss twins first Exchange Traded Fund (ETF) application was rejected by the Securities and Exchange Commission (SEC) in March 2017.

In the 2 ½ years since, there have been a number of other applications for an ETF, all of which have been rejected, with the SEC citing concerns regarding manipulation, volatility and fraudulent activity.

But does a government-granted ETF fit with the ethos of Bitcoin?

Bitcoin was born out of the cypherpunk movement, with the goal of taking power away from the government by giving people a trustless and censorship-resistant monetary system. As such. seeking approval from a government-run body for an investment fund is seemingly against this ideology.

It seems apparent that most Bitcoiners’ motivation behind seeking an ETF is likely down to money. The added liquidity, easy access to investors and media coverage an approved ETF would garner may well lead to a price increase and thus an ETF approval seems like an easily identifiable path to another bull market.

Could this be interpreted as Bitcoiners being hypocritical and caring more about the price of their coins than the intended goal of a censorship-resistant currency? On the other hand, it could be seen as a significant achievement in terms of mainstream adoption. After all, nothing aides Bitcoin’s adoption than media coverage and price-driven FOMO.

In this interview, I talk to Bloomberg Business News Editor, Joe Weisenthal. We discuss contradictory Bitcoin ideals and challenging the status quo, ETF’s, censorship resistance, privacy and the current state of the global economy.