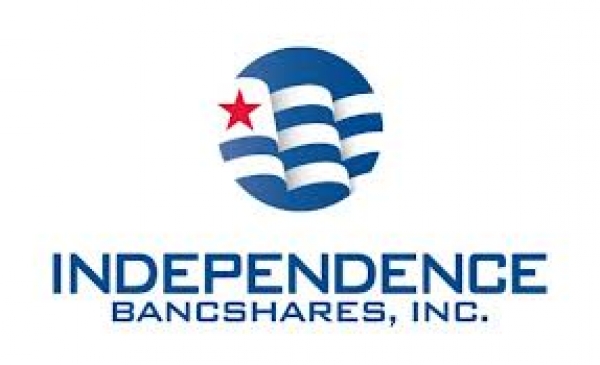 Independence Bancshares - a publicly traded (albeit thinly on the OTC:QX), FDIC-insured, community-based bank in Greenville, South Carolina - seemed poised to become the first bank in the United States to embrace Bitcoin payments, according to three patents published by the United States Patent and Trademark Office. However, after speaking with Chief Executive Officer Gordon Baird, Let's Talk Bitcoin has learned that Independence Bancshares has clearly distanced themselves from Bitcoin, but is "studying virtual currencies."

In April, Penny Crossman of American Banker - in "Small Bank Looks for Big Splash with Its Own Real-Time Payments System" - noted that:

Independence recently filed several patents for mobile payments technology, including: one for real-time, secure transaction processing; one for processes that control the format and routing of electronic messaging in real-time and near real-time; and a third for authenticating and provisioning accounts, devices, payments and compliance functions.

American Banker has been covering the Independence Bancshares story since at least October 2013, when Andy Peters wrote in "Former Citigroup Executive Has Big Technology Plans for Small S.C. Bank":

Gordon Baird plans to launch an application at Independence Bancshares that ties together mobile banking and real-time processing - a technology that some industry experts say could revolutionize banking.

The company additionally noted in its most recent quarterly filing (10Q) on August 14, 2014, under the heading "Transaction Services," that:

On September 18, the United States Patent and Trademark Office published the above mentioned patent filings. These are 20140279544, "Creation and Use of Mobile Identities," 20140279542, "Mobile Currency Messaging Systems," and 20140279403, "Methods and Systems for Executing Mobile Currency Transactions." These filings reveal that the company's ambitious plan to become a "digital payment clearing bank," as first reported by American Banker, provisionally included Bitcoin:

As used . . . [within these patent filings] . . . a currency may be a physical currency, a currency issued by a state entity, and/or a virtual currency such as BitCoin."

The "Creation and Use of Mobile Identities" application includes the "secure and efficient electronic form of 'identity' to ensure that an entity is who they purport to be" and utilizes social networks as part of this authentication process. A glimpse of this technology is provided under nD Bancgroup's "Update on Our Digital Platform Strategy" (PDF), page 18, under "Enables Central 'single sign-in' Personal Payment Credentials," in regards to the "Creation of a Secure Personal Ecosystem that Facilitates App Provisioning." This includes graphical representations for "Centralized Personal Settings & Utilities," "Personal Partner Applications" and interestingly, a "TipJar." nD Bancgroup is "pending trademark of Independence Bancshares, Inc." and according to their website, "Independence Bancshares and Independence National Bank, the financial organizations that make up nD bancgroup, were founded in 2005."

Although government issued identities are the market standard for verifying one's legal identity in any country or state, most governments continue to focus on the issuance of forge resistant physical ID cards while resisting digital implementations (which may be viewed as being too easy to manipulate or forge). Exemplary embodiments provide a different approach that resolves one's identity and issues a score based on how comprehensive, triangulate-able and consistent one's digital social trails are over an extended period of time.

I spoke with the Chief Executive Officer of Independence Bancshares, Gordon Baird, who said that they are studying virtual currencies, but did not mention Bitcoin:

We are intrigued by what is going on with virtual currencies. There appears to be some benefits including potentially lower transaction costs, better security, and digital integration. But there are significant issues that need to be resolved, including ensuring the legality of the activities, addressing all the regulatory issues, ensuring appropriate consumer protections are in place, and making sure there are appropriate risk controls and operating infrastructures. We would also want to make sure, from a public policy perspective, that engaging in these activities is something that is encouraged and appropriate.

The Doomsday Cult of Bitcoin http://t.co/MkDX5KGyKr via @Intelligencer

A tweet from Mr. Baird right before the patent application was filed this year.

The patent was co-invented, along with Mr. Baird, by former Verizon Wireless executives Aditya Khurjekar and Humphrey Chen, who both joined the company in September 2013.

In Rob Wile's article, "Forget Banks: If Bitcoin Is Going To Change The World, Then This Is The Real Competition," for Business Insider, Mr. Khurjekar stated that:

Even if it's not Bitcoin itself, a Bitcoin-like payment 'rail' that uses a network of computers to confirm transactions will take over, not just in Africa but everywhere. It is a business-model problem. . . . I think what Bitcoin - the cryptocurrency infrastructure, the technology - does, is it makes these artificial constraints irrelevant. It doesn't matter what geography you're in, whatever local bank consortium you're in, how quickly they have to settle money, it doesn't really have to follow these artificial constraints.

A recent article by India West, "Hobby Turns Blogger into Payments News Expert," profiled Mr. Khurjekar and reveals that he no longer is an employee of Independence Bancshares, but has been retained as an advisor to the company. He is the founder of Let's Talk Payments (not to be confused with the blogging platform I am writing this article on, Let's Talk Bitcoin!) and cofounder of Money20/20 "the leading global event for innovations in money." It was recently announced that New York's BitLicense regulator, Benjamin M. Lawsky, Superintendent of Financial Services at NYDFS, will be keynoting at Money20/20s (Bit)coinWorld in Las Vegas this November.

Don't Bank On It

In Why Banks Will Win the Payments War, Glen Fossela recently reported that,

Marc Andreseen and other Silicon Valley venture capitalists have been musing publicly recently about 'getting around' stodgy banks and speeding innovation by building a pure software bank. However, it is faster and cheaper for startups to partner with institutions, as Dwolla has with Veridian Credit Union, or to just buy one, as Independence Bancshares chief Gordon Baird did for his payment services platform.

However, Independence Bancshares does not appear to have any plans for Bitcoin, and patent filings do not necessarily indicate that a commercial product is imminent. While Independence Bancshares is "studying virtual currencies" (so much for "speeding innovation") companies such as OneName are already incorporating some of the basic ideas detailed in "Creation and Use of Mobile Identities."

Verifying that +bitofthis is my Bitcoin username. You can send me #bitcoin here: https://t.co/nCFFqvcM92

Here I am authenticating my OneName identification through Twitter. I received a tip almost instantaneously.

OneName was announced on March 10, 2014, which appears to be a week prior to the filing date of Independent Bancshares on March 17, though there is a related application (61791981) by Independence Bancshares from back in March 2013. In any case, Independence Bancshares did not propose a decentralized identity system for Bitcoin built on top of Namecoin. Chris Pacia has a great article, "Using OneName for Bitcoin Addresses," over at Bitcoin not Bombs, if you want to read a little more.

The patents were published, as Biz Carson of Gigaom reported less than a week later in "Two US banks are ready to embrace the Ripple protocol, allowing instant global money transfers":

New Jersey-based Cross River Bank and Kansas-based CBW Bank are set to announce their use of the Ripple currency protocol, which would allow instant and free cross-border payments on the network.

Microsoft ally Intellectual Ventures' holding company Elwha LLC also had a number of Bitcoin-related patents published in September, including 20140279419, "Methods And Systems For Implementing Various Transactional Architectures," which mentions that:

An internet currency provider (e.g., Bitcoin) may outfit various Starbucks with devices that allow Bitcoin transactions to be processed, using the device as an intermediary, without changing the Starbucks infrastructure. A user device may find these broker devices (which may not be implemented entirely in hardware) and use them to facilitate transactions, and may be invisible to the end user.

A number of inquiries about bitcoin transactions [ask] whether there are state requirements for licensing. . . . Montana is one of three states that do not license money transmitters (S. Carolina and New Mexico also do not). The question about licensing bitcoins . . . is whether licensing itself gives legitimacy to the alternative method of moving money.

Raleigh, North Carolina was recently the host of Cryptolina, which billed itself as "The Defining Bitcoin Event for the Carolinas." South Carolina may (or may not have) been the location of the first ever bitcoin seizure by the federal government.