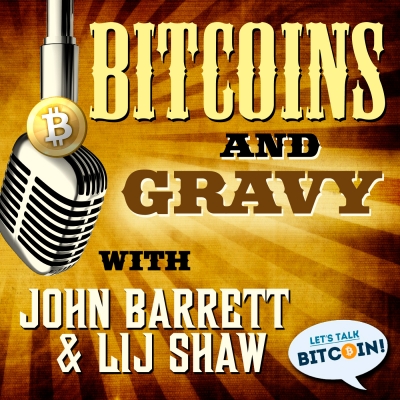 Bitcoins and Gravy Episode #21 - Papa's Got a Brand New Bitcoin!

Today is June 23rd 2014 – Welcome to Episode # 21 of Bitcoins and Gravy, a weekly
show about anything and everything having to do with Bitcoins and the Bitcoin
community.
On today’s show we get down with James Brown. No not the hardest working man in
show business, but a local Nashville Bitcoin enthusiast. James Brown gives us the low
down on how you can get a brand new bag to keep your bitcoins safe. Actually he shows
us some best practices that highlight safety and security when creating a paper wallet for
your own trusted Cold storage. This isn’t about paranoia folks - it’s about being able to
say “I feel good” knowing your bitcoins are safe.
We also learn about Bitcoin derivatives from George Samman - COO of Bitcoin.SX a
bitcoins derivatives trading platform that can put your bitcoins to work for you. Being
a former Wall Street Senior Portfolio Manager, Market Strategist and technical analyst,
George understands well the pitfalls of Wall Street and our current banking system. He
also understands how to take one bitcoin and turn it into 10! Its not magic folks, but it can
make bitcoins appear or disappear magically.
James Brown
Nashville Bitcoin Network
George Samman
BTC.SX
Carrier Pigeon info:
http://en.wikipedia.org/wiki/IP_over_Avian_Carriers
http://tools.ietf.org/html/rfc1149
http://www.blug.linux.no/rfc1149/
Special thanks to Alex Munõz Guijarro for his excellent pedal steel playing.
Interviews for this episode were edited and produced by Elijah “Lij” Shaw at The Toy Box Studio, East Nashville, TN, and by John Barrett in his shim shack.
Theme song “Gravy” by the band, Eleanor Roosevelt with Lij on fiddle.
Harmonica tracks provided by Billy O. Longstreet of Nashville, Tennessee.
And a big thank you to our sponsor Miktek Audio for providing the fantastic PM9 microphones!
Questions or Comments?
Bitcoins and Gravy Hotline: (615) 208-5198
Leave us your questions, comments or suggestions about our show and please speak
slowly and clearly. We would love to use your voice on our show and your feedback is
valuable to us.
(NOTE: If you would rather we did not use your voice, please say so on the message and
we can simply reply to your question without using your voice).
Email us to say Howdy!: [email protected]
Visit our NewWebsite: BitcoinsAndGravy.com
Bitcoins and Gravy Tipping Addresses:
Bitcoin: 1ByqQXLTm9JZGSwnfqCCakaifBt3grQkXS
Litecoin: LTwaVGVqzKeKbsfXZCz2g4yJxZj7oPsps