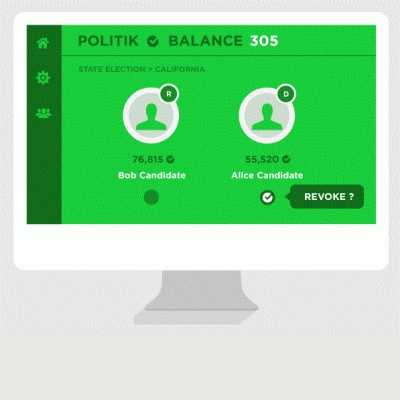 When we talk about Bitcoin or cryptocurrency, it is usually in the context of money. Sometimes it is in the form of stake, but this stake is usually acquired through some work or for funds donated. Politik is a system which recasts the metaphor of token from Coin to Voice - the ability to influence an outcome by making your “voice” heard.

This contrasts with the systems of the world today, voting is a process of the very slightly larger group getting their way while the smaller group does not. These “groups” as individuals are not represented at all, the one time they interact with their representative is during their periodic election. Once in office, they have the power to do as they will in the name of representing those constituents and the only alternative is the most-extreme recall election which even if successful only returns a different person to the same predictable predicament.

The problem is no accountability, voters are locked in once the decision is made. This made sense in the days of horseback travel, but in a post-bitcoin world this idea is preposterous. Accountability is necessary all the time, and applying the metaphors and tools of Bitcoin we can achieve it.

Imagine a cryptocurrency wallet that contains bitcoins, other cryptocurrencies and a category of tokens called (poli)”Tiks” - For each elected position you normally vote for, you have a purpose specific tik. You can send these but they will return to the original owner after a pre-set period of time. This is user-defined, the default would probably be 2 years.

There is also a “panic button” that recalls a specific tik if the person imbued with it is doing something you find so onerous you want to pull your support from them completely.

When laws are being voted on or decisions made, representatives send their own coin to the bill, either for or against and the weight of all the constituents tokens represent the total weight of the representatives vote. Unlike constituent tokens the default would be less than an hour, just long enough to validate and provide an anti-spam mechanism against legislating too fast.

This effect of tiks in a constituents wallet “weighting” their own tik does not just have to be one layer deep. If I don’t follow national politics but my friend Bob does and we generally agree, I can send my tik to Bob and then when he sends his tik to the Anthony, (the candidate he thinks is most valuable to support) Bobs vote is worth the same as if Anthony had sent his and I had also sent mine, except I just got to automatically do what Bob did.

Bob might not know himself, he could give it to his favorite political pundit who then would have more power with candidates since they literally represent the voice of their listeners.

For constituents this is very simple, they send their tiks as they see fit and can forget about them. If the representative steps out of line enough for the constituents to realize it, all they have to do is press the panic button and it actually reduces the power of the out-of-line representative.

That voice freshly in the possession of enraged constituents can then find its way to a different representative who is more accurately adhering to whatever principle their own rep is not. This can result in lasting gains for that representative as the new supporters might not take the pro-active step of returning it to the offending rep.

Similarly, if I have placed my tik with a political pundit or my friend and they do not withdraw their own token in support, I can choose to withdraw my token from them which has the impact of reducing their power as well.

The natural incentive in this situation will be for unpopular positions to be abandoned at all levels of the structure because the longer you wait, the more constituents will leave many of whom will not return

This also removes the need for “recall” elections, representatives who alienate their constituents will find their votes still being recorded but not carrying any weight in the decision. They will render themselves irrelevant. If the new representatives imbued with power become bad actors, it will vacate their vessel just as quickly.