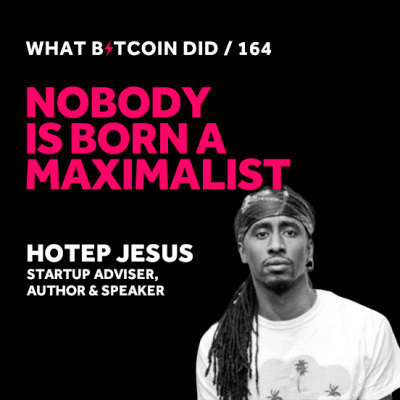 Hotep Jesus on Nobody is Born a Maximalist - WBD164

The name Hotep Jesus hit many radars for the first time when he appeared as a guest on the Joe Rogan podcast. The tech startup advisor, was there to speak about his latest book, and during the interview, the topic of blockchain was raised and BSV was mentioned.

The mention of BSV, although brief, caused a significant backlash towards Hotep on crypto twitter despite it not being Hotep who raised it. Many were angry that he chose to speak out seemingly in favour of the altcoin and felt he was 'promoting' it without the required knowledge and was adding to the misinformation and confusion in the space.

Although misguided, I could relate to Hotep's confusion and felt that his conversation with Rogan was a typical example of many people who are beginning their journey into Bitcoin. I too had attempted to raise the confusion when a friend asked me which Bitcoin to buy on Coinbase as he saw two options. The "2 Bitcoins" saga became a meme to attack by particular Bitcoiners, avoiding the issue of confusion.

Coming into the space it can be confusing. With multiple coins with Bitcoin in the name, some with a cult-like following and all shilling different ideologies/technical narratives, it can be confusing. How is a newcomer meant to know who to believe and which Bitcoin is the real Bitcoin? The objective amongst us can understand that the narrative for each coin can be persuasive.

Some people prefer to go for the approach of letting the newcomers get rekt before finding out for themselves. However, I believe this hard-line approach can scare people out of the market altogether, and we should concentrate on educating these newcomers.

In this interview, I speak with Hotep Jesus about confusion entering the market, as well as the benefits of Bitcoin, altcoins, race and equality and free speech.