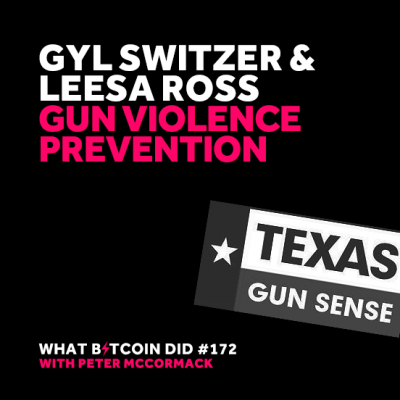 The 2nd Amendment to the U.S constitution outlines Americans’ right to keep and bear arms. America is now home to more guns than people and is the country with the highest number of deaths by firearms in the world.

The gun debate continues to polarise the nation. While many firmly stand by the constitution and see removing their right to own a gun as an attack on their civil liberties, others see the weapons as a dangerous and unnecessary threat responsible for tens of thousands of deaths per year.

Texas Gun Sense is a group who come at this debate with a more nuanced viewpoint. They aim to bring ‘common-sense, fact-based gun policies to Texas’. The organisation is not anti-gun, but they do support increased and more rigorous background checks alongside education to improve gun safety practices.

In a previous episode, Ragnar Lifthrasir joined me on What Bitcoin Did, and we discussed why he believes it is every American’s right to own a gun. To continue the discussion, in this episode, we hear from Executive Director at Texas Gun Sense, Gyl Switzer and Leesa Ross from Lock Arms for Life, whose son was killed in a handgun accident. We discuss their approach to gun ownership while still supporting the 2nd Amendment.