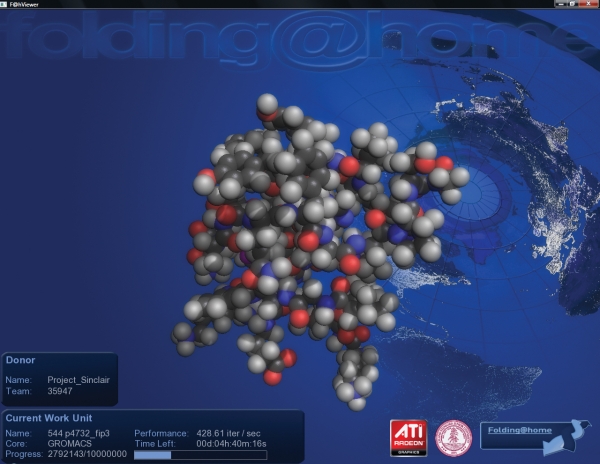 FoldingCoin: Mining for Medicine at Home

My name is Robert Ross, and I am the founder of FoldingCoin. For those who have never had the opportunity to mine, or have unused legacy mining equipment, continue reading.

I first heard about Bitcoin on March 19, 2013 when it was trading around $57 per coin. At that time, I did not care about the price. I was interested in the design and potential of Bitcoin. Even though I had been in IT for years, I had never heard of grid computing. I was completely inspired, and I talked with my friend for three hours before heading to an electronics store to buy two Radeon HD 6970s. We mined our first coins later that same night.

We discussed how revolutionary Bitcoin could be. As the price increased, we built up our rigs. But we shifted from mining Bitcoin to altcoins because of ASICs. In March, with the advent of Scrypt ASICs, I powered down my rigs, which totaled 34 GPUs and 8 CPUs. Then for the first time, I discovered grid computing outside of Bitcoin.

I first found a site called BOINC, and I was instantly hooked on research. Apparently Bitcoin was not the first grid computing project. BOINC offered hundreds of different projects, ranging from finding aliens to creating medicines. I thought this might be the answer. After I installed BOINC on my machines, I learned that most projects were not ATI friendly (most miners will have ATI cards) and the installation was not as user friendly as I would have liked for a general PC user.

Then I discovered a different project that was not on the BOINC platform and that was called [email protected], which only worked on one project, and which folds proteins for medical research. The program uses your CPU and GPU power to simulate the folding of proteins in the body, which helps medical researchers better understand how different proteins work. This work can lead to the development of new medical publications and potential therapies. Because their focus is one project, the development of their program is further along than most BOINC projects. It is easy to set up with little configuration, and the development team also seems to be significantly stronger at Stanford than at most BOINC projects. Within five minutes of setting up the Folding program on all my rigs, I was folding proteins.

This led me to an idea. Why not distribute a Counterparty asset to those who fold on the network? So my team and I created FoldingCoin (FLDC). The advantages can be far greater than having an altcoin with its own blockchain.

Since FLDC shares the Bitcoin blockchain, folders rely on the Bitcoin and Counterparty developers to introduce new updates to the coin, such as security, stability, and GUI. This allows us to focus on the adoption, distribution, and economics of the coin. No energy is wasted securing a blockchain, and all resources can be used strictly for [email protected] work units. The risk of a 51% attack equals that of the Bitcoin network. When you send FLDC to another wallet, you send a small amount of bitcoin in addition.

Distribution has been locked by the Counterparty protocol, ensuring that even the developers cannot introduce more coins into the market.

Similar to the way SWARM has holders vote on company decisions, we can implement a voting system for FLDC holders. This is more than a coin. It is an alternative to traditional mining. And for those who always wanted to mine but never could, now you can take any CPU (yes, even a Pentium III) and begin to help Stanford reach its goal of 1 million connected computers (at the time of writing 170,000 are connected) because even if you do not produce nearly as much as the top folders on the team, your CPU is still essential in creating one great big grid computing system. The value that backs FLDC is the fact that it represents a certain amount of time spent doing computational work for the [email protected] network. Most coins contribute only a blockchain that will eventually die. FLDC offers something else.

Our team is currently developing another use for the coin. We want it to become the currency of Meetup.com groups. We are still working on how to make this happen, but the general idea is that, since most everybody has a computer, this coin can easily be created by anyone who is a part of any Meetup.com group. FoldingCoin.net will give 10,000 FLDC (from our personnal funds) to any Meetup organizer who wishes to implement this program in their Meetup. FLDC can be distributed to members as organizers see fit. Perhaps they give 100 FLDC for attending a meeting, or 200 FLDC for bringing a friend. Perhaps even 1,000 FLDC for bringing a professional speaker to a meeting. Since each Meetup is unique, the rewards program may vary, but we are working on a general guideline. And this is not to be limited to just crypto Meetups. If this is used by any Meetup, it will not only help create medicines for Stanford, it will help the adoption of Bitcoin and FLDC.

This also provides a chance to eliminate cryptoswitching, which hurts the difficulty of each altcoin. Since there is no blockchain or difficulty, once you fold with Stanford, there is no other coin that you can switch to automatically. We estimate our project could triple adoption by bringing previous bitcoin miners to [email protected]

Please consider helping. Join our team and create medicines that will help all of humanity and make FLDC a great coin. Even if you do not want to fold, please consider buying FLDC to show that you support folding. Email me at [email protected] with any questions. Thank you everyone for being the greatest online community in the world!