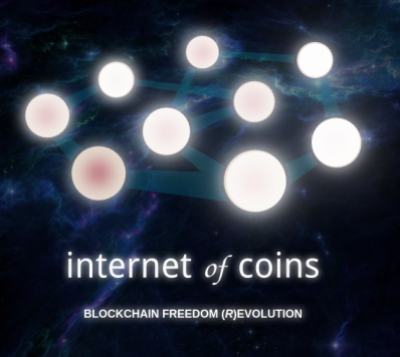 On today's show I interview Joachim de Koning the founder of Internet of Coins.

The goal of Internet of Coins is to create a comprehensive environment for personal finance that gives everyone access to all of the world’s Digital value systems. The platform is designed to connect all cryptographic ledgers and to integrate all token systems into an interconnected web through an open source financial networking agent, called hybridd.

Joachim does a great job of explaining all aspects of Internet of coins and it was a genuine pleasure speaking with him! And good news listeners, yes there is a token native to their system! It's called HYBRID. By the end of this interview the idea of owning some HYBRID of your very own will seem to make a lot of sense.

Even as many governments, including the EU, act to regulate the exchange of cryptocurrencies, de Koning's Internet of Coins aims to deploy a decentralized autonomous system that can support trading without any trusted third party being regulated by a government.

Joachim's team has been laying the groundwork for this platform for more than two years and in 2015 they received financial support from the SIDN Fund which was established by the independent non-profit foundation that manages the .nl domain in The Netherlands. The .nl domain happens to be the first country code top-level domain given to an organization outside of the U.S.

Today, after substantial development, the Internet of Coins team, has announced plans to hold a fundraising campaign to help pay for additional development and to kickstart the distribution of its native token called HYBRID. The crowd sale is scheduled to begin THIS Tuesday March 21st 2017 and will be supervised by the innovation fund of the Internet pioneer, NLnet Foundation, the country’s first Internet Service Provider that will act as the project’s financial and legal advisor.

In addition to being founder of Coinstorm and Internet of Coins, Joachim is CEO of the crypto and security company Metasync. He is also a developer for the NetAidKit, an open-source USB-powered router that protects online privacy, and was showcased at CCC. Next to that he is working on a system to counter large-scale DDOS attacks for Radically Open Security. He has extensive experience in financial markets, including foreign exchange, commodity trading, and automated accounting systems, and is an early adopter of blockchain technology and cryptocurrency.

And if you don't feel like contacting me, just kick back, relax and enjoy the show. I hope you enjoy listening to my guests as much as I enjoy talking with them!