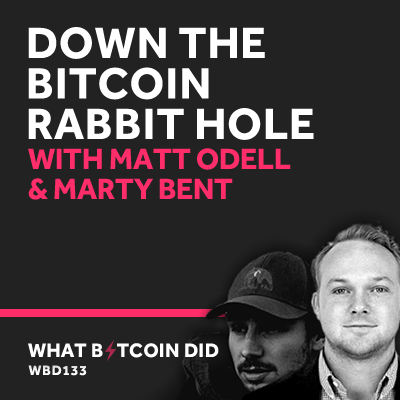 “I think the risk-reward ratio right now on Bitcoin, is the lowest it has ever been.” — Matt Odell

There are a handful of Bitcoiners who bleed orange, those with so much conviction it is hard to listen to them talk about Bitcoin and dismiss its importance. Matt Odell is one of those, and I have a little secret for you, Matt was the trigger for taking What Bitcoin Did full Bitcoin. Having wrestled with this for a while, I heard Matt on Stephan Livera’s show discussing podcasts where he said he liked some of what I was doing. “Some”. So Matt and I had a long chat about this, and it was a trigger for me to realise there is enough with Bitcoin to focus on.

Matt previously came on the show with Neil Woodfine to discuss what we would like to see for Bitcoin in 2019. I have though been keen to have him back on for a while, so when I was in NY recently I hit him up, and he agreed to come on.

Bonus: Matt’s co-host and the founder of Tales from the Crypt, Marty Bent joined us for the first half of the show. Since starting in October 2017, Marty has interviewed some of the most exciting people in the space, including Matt Corallo, Caitlin Long, Dan Held and even Jack Dorsey and have built their reputation as one of the premier Bitcoin podcasts. It is also my go-to podcast on a long drive.

We sat down over a glass or two of whiskey to discuss the podcasting industry and our favourite guests. We also look back at the community split during S2X and consider whether issuance and inflation could be the catalyst for a future contentious hard fork.