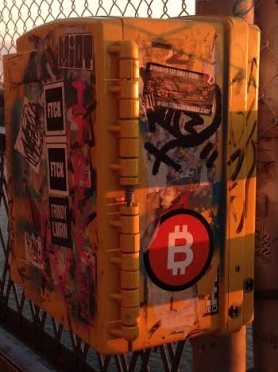 The Drug Enforcement Administration (DEA) appears to be involved in a case of mistaken identity over last year's seizure of 11.02 BTC. The DEA just issued a new seizure notice for the same wallet address, this time for 17.24 BTC. Interestingly, the new seizure notice lists the owner of this address as "unidentified," while the first seizure notice listed it as belonging to "Eric Daniel Hughes."

On June 23, 2013 I broke the first ever Bitcoin seizure story with Let's Talk Bitcoin Editor in Chief Adam B. Levine and his crack team of investigators Dan Roseman, David Perry, Justus Ranvier, and George Ettinger.

The Drug Enforcement Administration posted an Official Notification that Bitcoin (i.e. property) belonging to Eric Daniel Hughes was seized for forfeiture pursuant to 21 U.S.C. § 881, because the property was used or acquired as a result of a violation of the Controlled Substances Act (21 U.S.C. §§ 801 et seq.)

The DEA appears to have been the first agency to seize actual Bitcoins from an individual with this seizure.

Smith reported that Hughes's attorney, David Aylor, said his client strongly denies that he is Casey Jones, or ever used that name online. Hughes maintains that the bitcoins did not belong to him and that he had no part in buying or selling anything on Silk Road.

On August 26, 2014, the DEA posted another seizure notice with the identical wallet address:

Both seizures use the same wallet addresses, but occur in different jurisdictions. Also, the most recent seizure notice does not name Mr. Hughes, and instead lists an "unidentified" individual. This may indicate that the first seizure was a case of mistaken identity.

I spoke with David Aylor who stated that:

My client has always maintained that the Bitcoins in question were not his. I am relieved that it appears they are no longer attributing them to him.

Last year, I discovered that the DEA continually updates this seizure notice, but does not offer a public archive of seizures that fall off the list. I learned this the hard way, when I was unable to locate the PDF of the original notice shortly after we published the article. Fortunately, David Gilson at CoinDesk took a screen grab.

This was also the first time I published with Tumblr and I did not realize that articles are not date stamped. In June and July 2013, major news outlets mistakenly thought they were covering a fresh story because the DEA seizure notice contained a more current date stamp. We even tried to recover the PDF using Senseful Solutions Chrome Cache viewer, to no avail. In any case, I learned a valuable lesson about covering Bitcoin stories: what is here today can be gone tomorrow. Always archive.

Bitcoin cannot be seized in the same way as regular currency because of the way it is designed. Law enforcement agencies cannot take possessions of bitcoins from addresses unless they have access to the private keys of those addresses. However, when Bitcoin users utilize services that exist on top of the Bitcoin protocol and provide third parties with their private keys, they are at risk of having their bitcoins seized if law enforcement secures the cooperation of these third parties. Moreover, if a user unknowingly sends Bitcoin to a recipient who happens to be a government official, the recipient can effectively seize the coins in a bait and switch.

Furthermore, Bitcoin should be considered pseudonymous and not anonymous because it uses a publically viewable ledger of all transactions. However, it is curious that the DEA is unable to determine the owner of the address in question. Federal agencies use sophisticated computer analysis to track traffic on the bitcoin network, like the database maintained by the National Cyber-Forensics & Training Alliance as reported by Perianne Boring in "The Boring Bitcoin Report: May 5-11, A Not-So-Boring Week In Review."