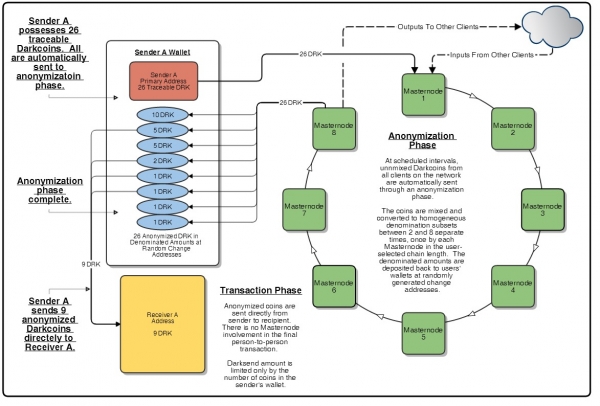 Darkcoin is best known because it has been the first cryptocurrency focused on anonymity and privacy. What many people do not know is how this feature is implemented, or how it opens a lot of exciting possibilities.
In order to achieve anonymity Darkcoin has successfully implemented masternodes. They are an innovation by themselves and are necessary to achieve the privacy that Darkcoin preaches.

Simply put, a masternode is a server connected with the network that performs certain tasks related with Darksend, which is what the anonymity feature is called, and gets paid for it. It is Proof of Service.
Anyone can run a masternode. The objective is to have enough of them for decentralization so nobody controls an important fraction of masternodes. On the other hand, to avoid bloating the network or having reckless operators, there is one condition that needs to be fulfilled: proof of ownership of 1000 darkcoins. The coins don't need to be in the masternode, but they need to be kept in a certain way. If the owner moves or spends those coins, the masternode stops working.
Masternodes get paid by the network for the services they provide. 20% of the new block's reward goes to pay the masternodes. Each reward is paid to one masternode randomly selected, so in the long term all masternodes should converge to a similar amount of rewards.
At the current release of the software (RC3), two masternodes mix the coins of the transactions that users send choosing to be anonymous. However, in a couple of weeks, a new release of the software will be launched (RC4) and their role will change.
In RC4 masternodes will anonymize the darkcoins users have in their wallets at preset intervals. This way, when they want to send them to somebody, they will already be anonymous and the transaction won't be able be traced by third parties. This has the additional advantage that the transaction will be much faster than it would be if the coins had to be mixed and anonymized at the moment of the transaction.
Up to eight masternodes will be involved in the process of anonymizing the coins of any given user. This means the system will be completely trustless because the risk of someone controlling all involved masternodes will be negligible. In a scenario with 700 masternodes, which is slightly less than the current number, there is only one chance in 1.3 trillion for someone with twenty five masternodes (an investment of around 160,000 usd at today's price) to control the eight involved ones and trace the transaction. Even more reassuring is the fact that the coins are never at risk even if there are rogue masternodes because they never leave the user's wallet.

What masternodes mean for the future

Having so many servers with the full blockchain working for the coin can be extremely useful. Thanks to the reward system, there is no risk of not having enough master nodes and the developers can rely on them for any new decentralized feature they want to implement. This is huge. Tell any developer that he can count on a thousand distributed servers working 24x7 for him and he will tell you.


I don't have a big imagination and I don't want to speculate too much, but some people have mentioned things like light wallets that rely on masternodes' blockchains, messaging services or distributed storage. Only time will tell.
Disclaimer: I own a significant amount of darkcoins and I am quite involved with the Darkcoin community. I'm obviously biased, but I'm also quite critical because I love the project and my money is at stake. I would not have invested if I didn't believe every good thing I say about Darkcoin to anyone who listens to me!