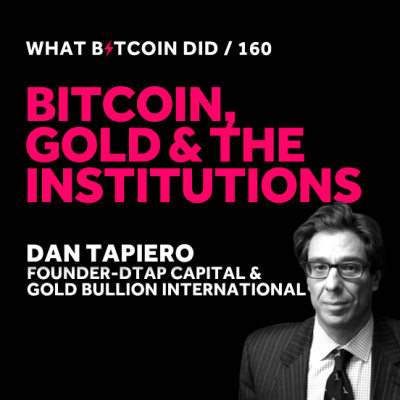 Dan Tapiero on Why Bitcoin and Gold Are Both Important - WBD160

“That feeling as a macro investor was… wow this is real, and I’m early, and I better figure out what to do right away.” — Dan Tapiero

Bitcoin’s design allows you holders to claim monetary sovereignty, taking money and power away from banks and the legacy financial system.

So, why do Bitcoiners seem so desperate to see the influx of institutional investors? A large injection of capital into the markets would likely see the price of Bitcoin go up, but, would it not be best to see organic growth in adoption by people, rather than corporations?

It is easier than ever for institutional investors to gain exposure to Bitcoin. With the recent launch of Bakkt futures contracts along with LedgerX and CME, there are ways for large traders to get skin in the game. But the volume is low, why?

Education is an often overlooked part of the Bitcoin onboarding process. No matter what background someone is from getting them to see past Bitcoin as 'magic internet money' can be incredibly challenging.

Dan Tapiero is a veteran global macro investor and a co-founder of Gold Bullion International. Having worked as a portfolio manager and analyst he became aware of Bitcoin in 2013, initially writing it off for having a too-small market cap and a "VC plaything". Dan's opinion has gone from not seeing the value in Bitcoin to believing it could take over as a financial system.

In this interview, Dan explains what changed his mind on Bitcoin, gold as a safe haven asset, Twitter, wealth redistribution, trade wars and Trump’s influence over the markets.