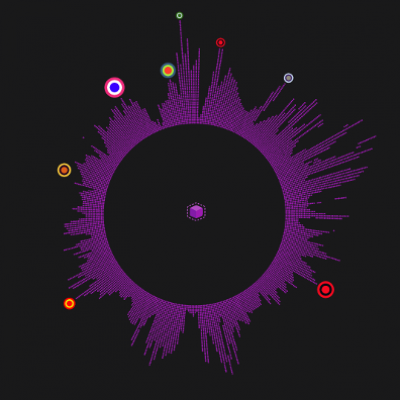 This is part 2 of my review of Blockstack Summit 2015, a conference I helped organize for developers of decentralized applications. You can read part 1 of my review here.

As the lunch hour at Blockstack Summit drew to a close, I began to prepare for the workshop agenda planning session. This session, inspired by the unconferences I had attended in the past and further helped along by Christopher Allen, would last about an hour and see the group vote on proposals for topics to be discussed during the afternoon workshop sessions. Each of the ten tables in the room was given a stack of construction paper and a sheet of star-shaped stickers. Anyone who wanted to propose a topic of discussion would write the topic on the construction paper, then anyone who wanted to discuss a topic would use their star stickers to vote. Everyone could propose a topic, and everyone got three votes, one vote for each of the three one-hour workshop sessions.

After everyone had a chance to write down the topic they wanted to discuss, I passed the microphone around the room so people could read their topic. After all the topic proposals had been announced, everyone brought their paper up to the front of the room and laid it down on the stage to prepare for voting. The group worked together to “deduplicate” or combine similar topics to maximize voting efficiency. Once all of the topics were on the stage, we took about ten minutes to vote and another five minutes to count the votes. After the votes had been counted, the topics were sorted from most votes to least votes. Since we planned to have three one-hour sessions with five concurrent discussions during each hour, the top fifteen topics by vote were chosen for the workshop sessions.

The final topics of discussion for the workshop sessions were:

During each workshop session, attendees spent their time in one of five groups to discuss the topic at hand. People could come or go from each group as they saw fit, with some people staying for the whole discussion and others migrating between discussions to gain a bit of insight from each. Some took notes while others participated actively in the discussion through intent listening or animated dialogue. Having so many subject matter experts at any one table could have led to a clash of egos – many of the folks at this conference are used to being on stage doing the talking – but what I saw instead was an earnest exchange of wisdom and insight which would have otherwise been lost or buried in the noise of the Internet without this unique opportunity for sharing and learning.

What was most heartening to me was witnessing people who in other contexts might be considered “competitors” coming together at the Summit as collaborators to solve shared problems. Several times throughout the day, I heard startup founders say something along the lines of, “I would like to work with anyone else who is trying to solve this problem so we can develop a common standard.” While heartening, this was also unsurprising for several reasons:

This open collaboration between “competitors” was visible in nearly all of the workshop sessions, and no doubt led to some valuable discussions that helped push the ball forward on tough issues that these developers were, are, and will continue working through.

The one workshop session I attended in between conversations and preparing for the afternoon Q&A session was also the one that was most important to me: “Governance of Blockstack.” Blockstack is a community of developers who are working together to create a set of standardized tools for building decentralized applications – the “blockchain application stack.” While the Blockstack toolkit is more or less complete thanks to contributions by the open source community, the Blockstack community wants to incorporate tools from other projects and have more developers involved with Blockstack decision-making. This inevitably leads to questions about governance: who decides how decisions are made, what decisions are made, and who the decision-makers are? This workshop discussion group brought together Blockstack contributors to discuss the future of Blockstack governance. Given the complex nature of the topic and the fact that many stakeholders were not present at the time, no concrete decisions were made, but by the end we agreed that we wanted to work together to come up with a good solution and we would continue the conversation after the event.

Before the afternoon Q&A panel, we had an opportunity to hear from Juan Benet of Protocol Labs about the IPFS project. He had traveled all the way from Europe to be at the Summit, and flight delays caused him to miss his scheduled lightning talk in the morning. Fortunately, he made it safely for the afternoon sessions and delivered an excellent overview of IPFS, the Interplanetary File System, a project that seeks to create a “permanent web.” It works like a combination of git and BitTorrent, turning all files on the network into content-addressable hashes rather than location-based URLs. This way, whenever you want to find a file e.g. a video, picture, or an entire webpage, even if the original host of the file disappears, you'll be able to get it from someone else on the network who has the file. This kind of technology could work in conjunction with a futuristic browser like ZeroNet to create a totally peer-to-peer Internet, where content isn't lost just because the original website that hosted it went down. The implications for free speech are tremendous! Huge thanks to Juan for spearheading this project and making the trek all the way from Europe to tell us about it.

After the presentations and workshop sessions were over, we heard from a panel of investors about why they are excited about the blockchain and what their vision is for the future of this technology. The panel was moderated by Princeton Professor JP Singh and featured Albert Wenger of USV, Jalak Jobanputra of Future/Perfect Ventures, Naval Ravikant of AngelList (who joined via Internet), and William Mougayar of Startup Management. This was a very lively panel with many great insights for entrepreneurs and developers of disruptive technology. It was a real treat to hear the perspectives of investors who are betting big on the future of the blockchain and to learn about how they're applying their startup experience and investment theses to this new market.

Some choice quotes from the panel:

“Walled gardens are great for investors, but bad for freedom... the solution is to decentralize all the things.” - Naval Ravikant

“The developed world has legacy payments infrastructure that will take much longer to disrupt.” - Jalak Jobanputra

“Identity is the central linchpin to enabling a large number of different systems... if we fail at identity, we fail at everything else in this 'decentralize all the things' world.” - Albert Wenger

“Bitcoin as a public network is important.. I'm waiting to see any currency move on the Bitcoin network, or any public blockchain network.”
- William Mougayar

“If we're looking for Bitcoin and blockchain adoption, one interesting thing to consider is machine-to-machine communications.. if there was an AI, an AI would not bother signing up for a VISA or Mastercard or opening a bank account at Wells Fargo.. it's going to transact using Bitcoin.”
- Naval Ravikant

“Attribution for digital publishing is a use-case where decentralized identity is superior, because the attribution cannot be revoked by a third party.” - Albert Wenger

“If we continue to experiment in labs and not take the technology out there and provide use cases with value, then it won't go anywhere... investors I talk to don't see the value, they think things are fine the way they are.” - Jalak Jobanputra

“We will fail if developers do not do a good job of explaining the context in which they are working... it's important to explain why you're doing this, and what is the real world benefit to what you're doing...” - William Mougayar

“There's a big failure mode around all of us thinking this is going to happen overnight, when in reality it's really going to happen at a much slower pace, so we have to pace ourselves...We should not kid ourselves that [centralization] forces can be easily overcome.” - Albert Wenger

“Most of you are too early, not too late... most of you are going to run out of cash before your vision is ready to be absorbed by the market. This is a game of survivor.. the longer you can last, the cheaper you can be, the more you can scrape by, the more likely you are to be able to make your own timing here... find applications that can get money in the door, and keep your burn rate low.”
- Naval Ravikant

Q: “What can engineers do to build products for people who aren't engineers?”
- Wayne Vaughan

A: “Talk to people who aren't engineers.” - William Mougayar

“Anything disruptive can be used for bad or good.. we have the dark web, it isn't going away.” - Jalak Jobanputra

You can hear the full audio from the Q&A panel on Episode 250 of the Let's Talk Bitcoin podcast.

After the Q&A panel, the crowd slowly trickled out of the Hall and took their conversations into the New York City streets and nearby bars and restaurants where people were meeting for a post-Summit drink. Tatiana Moroz of Tatianacoin fame organized a dinner at an Italian restaurant nearby that a couple dozen of us attended, where we shared wine, food, and stories about startup life, projects, and our ideas for the future. The night ended with the swapping of contact information, hugs, and QR codes as people worked to split the bill with bitcoin. The scene revealed the novelty and immaturity of the technology and simultaneously the urgent need for solutions as people negotiated how they were going to pay for their share of the meal. Payments might not be the use-case that leads to wide adoption of Bitcoin, but it certainly helped light the spark that led to the cambrian explosion of projects we heard about that day at Blockstack Summit 2015.

This post was orginally published on the Blockstack community forums. You can learn more about the open source Blockstack developer community at blockstack.org.