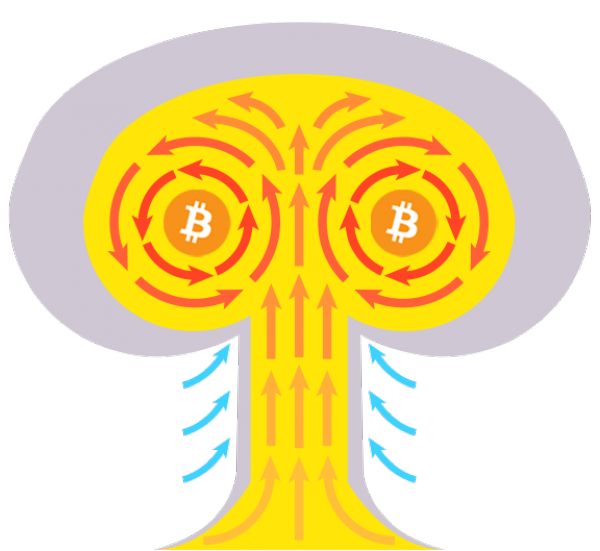 Bitcoin or “DARPACoin” Could Save Civilization After a Nuclear Event

“Rumor” has it that the Internet was created by ARPANET as a means for the military to communicate after a nuclear war:

"It was from the RAND study that the false rumor started claiming that the ARPANET was somehow related to building a network resistant to nuclear war. This was never true of the ARPANET, only the unrelated RAND study on secure voice considered nuclear war”.   (Source: Brief History of the Internet, Internet Society)

There is no denying that Internet itself starting out as a project from the (Defense) Advanced Research Projects Agency called ARPANET. “In the best bureaucratic tradition, DARPA – or ARPA, as it was called at the time – involvement in the creation of the Internet began with a memo...Dated April 23, 1963” begins “DARPA and the Internet Revolution” (PDF).  It explains how the first packet router of ARPANET, the “Interface Message Processor” or IMP was “a key refinement to the decentralized nature of ARPANET, routing information so that data could avoid being sent through every node's main computer”.    And pardon the spoiler, it “birthed the internet”. By March 1982, TCP/IP version 4 was deemed reliable enough for the Department of Defense to make it the standard for all military computer networking. And on Jan. 1, 1983 – a date that arguably marks the real-world birth of the Internet – the ARPANET itself switched over to TCP/IP.

Maybe it is just in fashion to dispel what some have referred to as rumor or urban legend?

RAND or “Research ANd Development” formed shortly after World War II as an independant (from the Douglas Aircraft Company) nonprofit organization “to connect military planning with research and development decisions... to furthering and promoting scientific, educational, and charitable purposes for the public welfare and security of the United States”.

RAND explains how Paul Baran a researcher at RAND worked on "hot-potato routing" or a distributed communications concept for “U.S. telecommunications infrastructure to survive a ‘first strike”.  On its webpage “Paul Baran and the Origins of the Internet“ RAND states that “US authorities considered ways to communicate in the aftermath of a nuclear attack”. How could any sort of ‘command and control network’ survive?  The solution was to “design a more robust communications network using ‘redundancy’ and ‘digital’ technology”. RAND further extols that “This effort would eventually become the foundation for the World Wide Web”.   For further information see U.S. Air Force Sponsored RAND Research Memorandums On Distributed Communications, especially “Introduction to Distributed Communications Networks” (Mirror) RM-3420-PR (PDF)  and  Digital Simulation of Hot-Potato Routing in a Broadband Distributed Communications Network  RM-3103-PR (PDF) dated August 1964.

Evan Soltas had an editorial for Bloomberg last year entitled,  “Bitcoin Really Is an Existential Threat to the Modern Liberal State” while former Director of Central Intelligence, R. James Woolsey, warned  at Center for Security Policy that natural or nuclear electromagnetic pulse (EMP) to the U.S. electric grid and critical infrastructure that “sustain modern civilization” was also an “existential threat”.

What would happen to our civilization if there was  a nuclear or EMP or Electromagnetic Pulse event?  Would we devolve into anarchy and chaos?

While July 1979 sounds ancient, to put things into perspective, I found an August 27th, 1979 story from American Banker called “Customers Love Checking Balances on ATMs”  which cited the first annual ATM survey by Linda Fenner Zimmer for The Magazine of Bank Administration.  That is to say, the modern world just began interfacing with computer terminals that are, quote “on line” to retrieve electronic balances and physical money:

1989 shouldn’t be an unfamiliar year. This was the same year that Tim Berners-Lee invented the World Wide Web at CERN,  which finally  brought to fruition the idea of hyperlinks (“ linked mesh of associative trails”) by Vannevar Bush from 1945 in his article for Atlantic Monthly “As We May Think.”

Let’s dig into “Options for Accelerating Economic Recovery After Nuclear Attack.  Following are extracts from this report:

"Five broad categories of adjustments {to Economic Policy} are discussed.--The first concerns keeping the market mechanism functioning, including a bolstering of the -survivability of communications and banking systems, the preparation of alternative forms of money, and the creation of possible backup securities and commodities markets.”

Bitcoin is not only a currency but a permanent decentralized public ledger with distributed trust that can preserve contracts and deeds to property through technology built on top of the Blockchain such as Proof of Existence. It is an internet-scale asset register that may not only  “change the world”,  but possibly save it.

FEMA could not have dreamed up everyone’s favorite decentralized “trustless” cryptocurrency at the time, nor  could they imagine a fractured central reserve system with alternative currencies after a nuclear attack from the Soviets.

“Markets, Distribution, and Exchange After Societal Cataclysm” report states that:

“...a critical problem will be the maintenance of trust and authority. The more drastic the change from pre-attack society, the more difficulty people have in deciding whom to trust, who has the skills that they advertise, and who will behave with fiduciary responsibility…”

“Given that there may be a desperate need for decentralization of government economic policy if Washington has borne a heavy portion of an enemy's attack, some attention has already been directed to having the management of money and banking taken over by the separate Federal Reserve Districts and even by local banks working to coordinate with each other.  Further research is probably in order on a number of points here. To begin, the Federal Reserve Districts are themselves based in large cities,and the advantages of targeting them, along with Washington, can hardly have been lost on the Soviets. The extent to which the central data collection and decision-making responsibilities of such districts should be dispersed or relocated or hardened against attack is something well worth considering.”

“As the chaos sorted itself out, of course, one might have a number of such currencies in circulation at the same time, with varying exchange rates among them. Trade in a Michigan town might be conducted with a mixture of gold, diamond rings, Federal Reserve Notes, Canadian dollars, and food vouchers. Virtually any of such monetary tools would improve the economy is performance over a straightforward barter, where shoes were traded for potatoes, etc.”

“Would the government or governments which appear after an attack actually find it necessary or desirable to fractionate the country into different monetary units because different degrees of devastation or reliance on paper money required this? What if Federal Reserve Notes were thus generally valued and accepted in Oregon (which, perhaps, did not get hit very hard by the Soviet attack) but were found of dubious value in North Carolina, amid a consequently enormous inflation of prices in dollars paid per can of beans?”

Bitcoin can be EMP Proof and a localized nuclear or EMP event need not cause the end of civilization as we know it.  Bitcoin can become the UPS or “Uninterruptible Power Source” that drives the economy and perhaps society as (we will) know it.

The Blockchain nodes are being sent to outer space by BitStat.  These Bitcoin satellites are being launched in part to secure the “redundancy and resiliency” of the Bitcoin network.  The Wall Street Journal also just reported that “Google Invests in Satellites to Spread Internet Access: Company Projects Spending More Than $1 Billion to Connect Unwired Reaches of the Globe.”  And further Wireless Mesh Networks such as the “Open Garden Mesh Protocol” will “enable people to create their own network and to become an extension of the internet”.   It was also  recently disclosed in the “U.S. Relinquishes Control of Internet Shortly after Discussion of Namecoin in Draft ICANN Report”  that ICANN plans to further decentralize the internet and has been discussing the advantages of Namecoin, which utilizes a Bitcoin like "byzantine algorithm" which Namecoin is derived from.

The military community continues to explore distributed systems through awards such as “Remote Attestation and Distributed Trust in Networks (RADTiN) (see “U.S. Air Force Building Bitcoin Payment Gateway”) as well as TorCoin (which I referred to as “DARPACoin”) a new altcoin supported in part by the O?ce of Naval Research via Defense Advanced Research Agency (DARPA) and SPAWAR Systems Center Paci?c, Contract No. N66001-11-C-4018:  A TorPath to TorCoin: Proof-of-Bandwidth Altcoins for Compensating Relays. TorCoin will be presented at the Workshop on Hot Topics in Privacy Enhancing Technologies (HotPETs 2014) at the Privacy Enhancing Technologies Symposium on July 18, 2014 in Amsterdam, Netherlands.

Jeff Garzik, Bitcoin Core Developer and Founder of Bitstat declined to be interviewed for this article. Professor George Quester, author of the FEMA report “Options for Accelerating Economic Recovery After Nuclear Attack” did not respond to an email request for comment.

Following is an extract from “Markets, Distribution, and Exchange After Societal Cataclysm” that made  my brain “hurt”... just thought I would share it as I wasn’t sure where to insert it into the article:

“...prestige exchange is inextricably linked to conspicuous consumption and, sometimes, the extravagant destruction of property. Nevertheless, it may be a necessary precursor to the establishment of trust between traders as well as the restoration of currency and credit….”