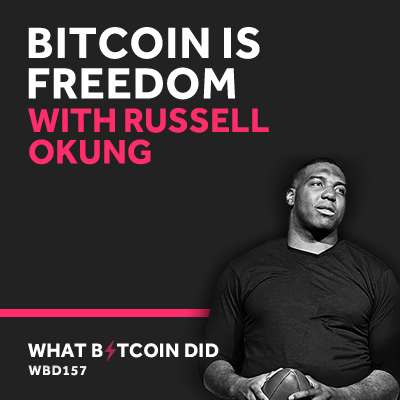 “There are real issues that we can solve and the more people that get into this the better it is. It’s money for the people.” — Russell Okung

Bitcoin’s value lies not in its price but in its innate qualities and the freedom that those qualities offer. It is decentralised, trustless, secure and the hardest money ever to exist. It’s irreversible, scarce and accessible to everyone.

But many new to Bitcoin fail to understand these qualities. Usually, a first entry point is a fast-moving bull run where Bitcoin’s price is rapidly growing. Whether a newcomer makes gains or gets rekt, not all will stay, and those that do usually venture down the rabbit hole to learn more.

So how do you encourage mass adoption from people who might not understand the full capability of Bitcoin?

Russell Okung is an offensive tackle for the LA Chargers and he’s trying to do just that. In September he launched Bitcoin Is_, a conference in LA to help encourage mass adoption of Bitcoin.

This show is the fireside chat I hosted with Russell Okung at his event. We discuss what Bitcoin means to Russell, negotiating his own NFL contract, asking to be paid in Bitcoin and controlling your wealth.