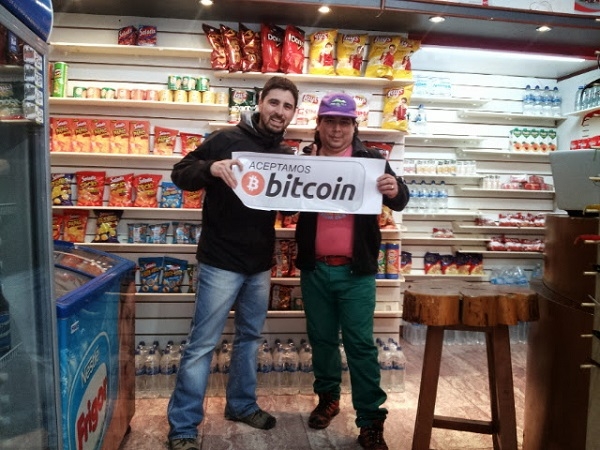 With Argentina in the news a lot, it is hard to ignore their need to find a better way to do business. Printing more pesos will not make the problem go away. One small store owner in Patagonia has taken the opportunity to accept bitcoin instead of the depreciating Argentine peso.

I recently headed down to the beautiful town of San Carlos de Bariloche, famous for its mountains, enormous fresh water lake and Swiss style town, to make my first purchase using bitcoins. Surprisingly, I had been studying Bitcoin for over a year and I had not made my first Bitcoin purchase yet!

I bribed my family with the promise of goodies from the store to come with me. The downtown located Maxikiosco is a quick stop for snacks on the go. I wanted them to not only see how cool it is to use this new international money, but to finally also see in action the technology I had been bragging about for so many months.

I opened the "Aceptamos Bitcoin" branded door and right away, in an Argentine tone, I asked the owner in Spanish, "Are you really accepting Bitcoin?" A slow smile came to his face. Little did I know that his store was becoming popular with clients paying with bitcoins. He confirmed that he was accepting bitcoins and my family and I selected our items. I put all the goodies on the counter and he quickly counted the final sum in pesos... and that is where the ease of the transaction came to a screeching halt.

Argentina has two exchange rates: the official rate and the "blue" rate. The first is the official rate of the peso to the dollar or any other fiat. The second is the black market rate that fluctuates depending on the actual demand on the dollar (Mycelieum has confirmed with me that they are planning to put a blue rate in their wallet soon). Bitcoin is exchanged at the blue rate, of course. This means the price must be converted to the blue rate and then to Bitcoin. After a few minutes of this, we confirmed how much I owed in bitcoins (he hadn't moved over to millibits yet, even though it would be more convenient for him due to the small-value sales he makes).

Determining the price in bitcoins, however, was easier than trying to scan the tiny QR code on his small iPhone4. He was going to dictate the information to me but I stopped him. I have a strict rule of no manual inputs, which I consider ridiculous in this day and age. Next, the store owner tried to text the address to my phone so I could copy and paste it. After a moment, I noticed I had no cell signal in his store, which also meant I could not confirm the transaction. My family looked on, doubting they were going to get their promised drinks and snacks.

"Fear not! Over 20 years in the IT industry, I've seen worse!" I exclaimed. He had wifi. I tried to connect to it. No luck. I had seen this before, cell phone hung, waiting for an IP address. He said he knew another wifi (possibly the neighbor's?) and success! We were back in business. I noticed he was using BitPay on his laptop. At this point, I took over and asked him to just show me the QR code from his laptop screen. I scanned that in a jiffy and sent the millibits.

I was not expecting the speed at which the propagation occurred. No sooner had I entered my pin to confirm the sending amount, did I hear a beep on his laptop. He gave me a huge sticker that read "We Accept Bitcoin" in Spanish as a gift. I had my first Bitcoin purchase, and it was as cumbersome as all the podcast horror stories I have heard about first time users. We both agreed that there was no need to wait for any confirmations; it would be more for peace of mind than a necessity with these kinds of transactions. My Bitcoin wallet finally had an output and was not blank anymore.

I thanked my family for their patience and even took them back there again later in the day for another transaction that went much smoother (saving wifi and Bitcoin address helped!). I realized that small business owners can provide a much better experience if they do the following:

The Bitcoin scene is growing in southern Argentina. The best thing we can do is convert fiat slowly to Bitcoin, using it as a savings account (to avoid these roller-coaster volatility) , encourage the BTC economy by using it when possible, and help others understand and transact with it.

I spend an average of about two hours per new adopter helping them setup their new wallet, back it up, erase it and restore it from backup before finally conducting their first transfer. I advise everyone to have a method for heirs to access your accounts in the event of your death to avoid seeing the funds lost forever.

Arturo D'Elia has been working in the IT industry for the last 21 years. He is currently volunteering freely and independently in Argentina's Patagonia region to help people learn and understand Bitcoin. Donations are greatly appreciated! His profile can be found here: https://plus.google.com/+ArturoDElia