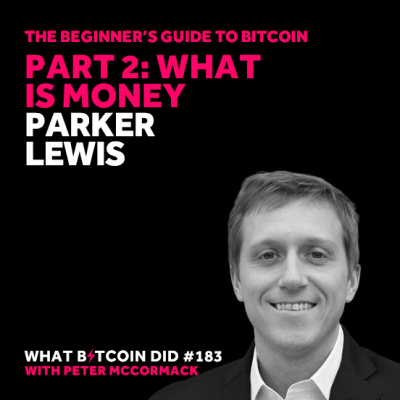 The Beginner’s Guide to Bitcoin Part 2: What Is Money with Parker Lewis - WBD183

Welcome to The Beginner's Guide to Bitcoin:

Part 2 - What is Money with Parker Lewis

As the old adage says: money makes the world go round, but why? Money allows for free trade between people, solving the double coincidence of wants problem.

To facilitate trade, early money took many forms: from Rai stones to salt to shells. The characteristics of base metals quickly led them to become the dominant form of money once introduced, with gold being the most valued.

In the 1800s, both the UK and the US, as well as many other countries, implemented a gold standard, allowing banks to issue paper money to represent the gold that they held in reserve. The gold standard maintained gold as a hard currency but with paper bills solving the problem of transporting heavy bullion and divisibility.

In the 1930s, during the depression, the US government devalued gold and made it illegal to own privately. In 1931 the UK abandoned the gold standard, and in 1971 the US severed any remaining ties to it. This marked the beginning of the current era of money.

Bitcoin has all the characteristics of sound money; however, in one key area, it far exceeds gold - transferability. In a digital age, Bitcoin is sound money that can be sent over the internet and has the potential to change the nature of money for everyone.

In part 2 of The Bitcoin Beginner’s Guide, I talk to Parker Lewis head of business development at Unchained Capital. Parker answers the question, what is money? We also discuss the history of money and the characteristics of sound money.