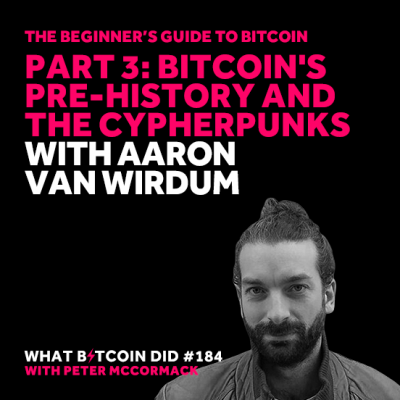 The Beginner’s Guide to Bitcoin Part 3: Bitcoin's Pre-History and the Cypherpunks with Aaron van Wirdum - WBD184

Founded by Eric Hughes, Tim May and John Gilmore the cypherpunks were a group of hackers, privacy enthusiasts and crypto-anarchists. The group consisted of some of the most prominent cryptographers including Phil Zimmermann, Adam Back, Nick Szabo and Hal Finney.

The cypherpunks had its factions; some focussed on privacy tools, others on encryption and some on building decentralised monetary systems. It was on the cypherpunk mailing list and during their meetups that the building blocks of Bitcoin were born.

On October 31st 2008, Satoshi Nakamoto emailed the cypherpunk mailing list, telling them "I've been working on a new electronic cash system that's fully peer-to-peer, with no trusted third party." In the 11 years that followed Bitcoin has proven to be the most successful attempt at creating a censorship-resistant and trust minimised digital currency.

Each previous attempt at creating a form of digital money had solved parts of the puzzle, but Satoshi was able to put these pieces together along with his innovations to create Bitcoin. The previous attempts included:

In 1997 Adam Back created HashCash, a proof-of-work system to reduce email spam and prevent denial of service attacks.

Around the same time, Nick Szabo proposed Bit Gold where unforgettable proof of work chains would share properties of gold: scarce, valuable and trust minimised but with the benefit of being easily transactable.

In 2004 Hal Finney built upon the idea of Hashcash and created Reusable Proofs of Work.

When Satoshi released the Bitcoin whitepaper, rather than a revolution, Bitcoin was an evolution of all that had come before it with Bitcoin being the most trust minimised, censorship-resistant and hardest currency that has ever existed.

In Part 3 of The Bitcoin Beginner's Guide, I talk to Aaron van Wirdum, a journalist and Technical Editor at Bitcoin Magazine. Aaron explains the cypherpunk movement and the digital money projects which paved the way for Bitcoin.