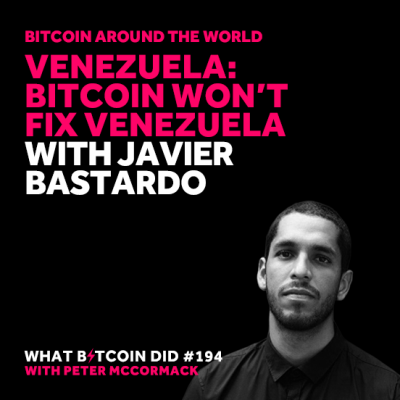 Venezuela is many years into a political and economic crisis. Rooted in the Hugo Chavez presidency and continued by Nicolas Maduro, Venezuela is a mafia dictatorship wearing the cloak of socialism.

Years of economic mismanagement and corruption has led to financial disaster in Venezuelan, comparatively worse than the Great Depression, Zimbabwe's 2008–2009 hyperinflation crisis and the breakup of the Soviet Union.

Hyperinflation led to significant growth in poverty, starvation and mass migration, with millions leaving the country. With the collapse of the currency, many Bitcoiners, including myself, asked whether Bitcoin could help. Could Bitcoin reduce the impact of hyperinflation? Could locals mine Bitcoin at low energy costs to earn an income? I visited Venezuela to find out.

In this interview, I talk to Javier Bastardo, a journalist for Cointelegraph, based in Caracas, Venezuela. We discuss Venezuela's political and economic situation, hyperinflation and the reality of Bitcoin adoption in the country.