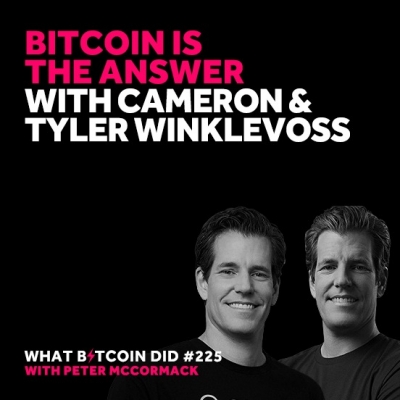 WBD225 - Bitcoin is the Answer with Cameron & Tyler Winklevoss

The Social Network, directed by David Fincher, introduced Cameron and Tyler Winklevoss to the world. The film told the story of how Mark Zuckerberg stole their idea to create Facebook, and would later settle for $65 million.

After settling the court case and retiring from their careers in rowing, where the twins represented the USA in the 2008 Beijing Olympics, they started a fund and discovered Bitcoin. In 2014 they created Gemini, now one of the largest regulated cryptocurrency exchanges.

The film portrayed the twins as cliche sporting jocks, an image which has been hard to shake off. Cameron and Tyler are more at home building things and their success since Harvard is not luck.

My picture of the twins, like most, was created from the Social Network and their appearances on mainstream news discussing finance, but I wanted to know more about them. This interview is, therefore, the interview I have wanted to hear from them. We discuss The Social Network, Facebook and Mark Zuckerberg, how they discovered Bitcoin, regulations and the role of Wall Street.