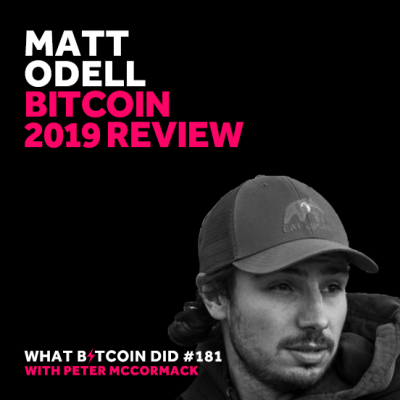 The Bitcoin space moves fast, and 2019 has been no different. Starting the year at the bottom of a harsh bear market after hitting a low of $3,100, Bitcoin began 2019 trading close to $3600. While the price spiked at around $14,000, it has settled in the $7-8k range, representing an approximate 100% rise in price. Also, despite the volatility, the hashrate has reached an all-time high.

The SEC is still yet to approve a Bitcoin ETF with Bitwise' proposal the latest to be rejected. Jack Dorsey launched Square Crypto, and Facebook made plans to launch a 'cryptocurrency' called Libra.

With exchanges, Cryptopia was hacked and subsequently shut down, and QuadrigaCX suffered the same fate following the suspicious and shock death of its CEO Gerald Cotten.

So 2019 has been a busy year in Bitcoin and my final interview of the year is with Matt Odell, co-host of the Tales from the Crypt and Rabbit Hole Recap. We take a look back at 2019, discussing Bitcoin only businesses, the most important projects and our predictions for 2020.