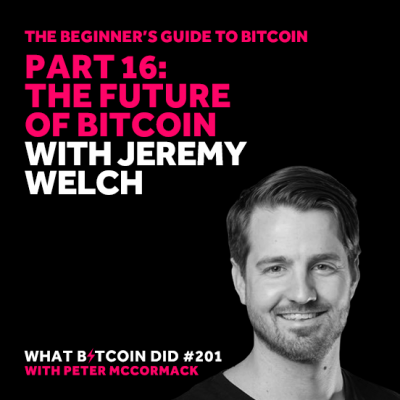 Beginner’s Guide #16: The Future of Bitcoin with Jeremy Welch - WBD201

In just 11 years, Bitcoin has already achieved so much:

Market capitalisation is nearly $150 billion, and Bitcoin is now on the radar of investors globally.

A phenomenal ~ 110Exahash secures the network.

Transactions are regularly well over 300k per day.

Bitcoin is the most decentralised and censorship-resistant currency in the world.

A lot has happened in a short space of time, but what will the future hold for Bitcoin? There are still many challenges for Bitcoin, whether that is scaling, enhancing privacy or UX and ease of use. At the moment, Bitcoin is still for the relatively tech-savvy.

While Bitcoin has been met with either scepticism or fear by governments, in general, there has been little action taken to disincentive people from owning using it. If adoption continues to grow, will the world powers enforce stricter regulations?

In Part 16 of the Beginner’s Guide to Bitcoin I talk to Jeremy Welch to discuss the future of Bitcoin. We get into how governments and central banks will react as Bitcoin poses more of a threat, and if we will see hyperbitcoinisation.