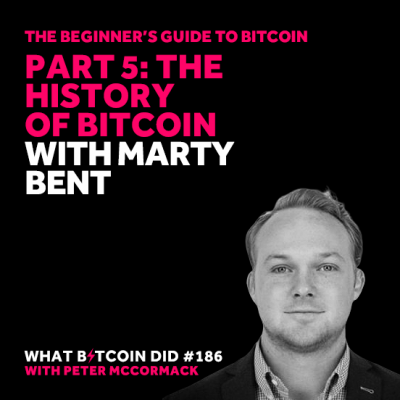 The Beginner’s Guide to Bitcoin Part 5: The History of Bitcoin with Marty Bent - WBD186

Beginners Guide Part 5 - The History of Bitcoin with Marty Bent

On October 31st 2008 Satoshi published the Bitcoin Whitepaper on a little known cryptography mailing list. There had previously been many attempts at digital cash, so when the whitepaper was released, it was met with a healthy amount of scepticism.

A few months later on January 3rd 2009 Satoshi Nakamoto mined the genesis block and included the message “Chancellor on brink of second bailout for banks”. The message was important and indicated Satoshi’s plan for a new financial system.

In the 11 years that have passed Bitcoin has gone from a niche experiment to a network worth over $160 billion, but the history has been rollercoaster.

Anyone new coming into Bitcoin is likely to hear about critical points in history, and these events helped define Bitcoin and at times teach valuable lessons:

In Part 5 of The Beginner’s Guide to Bitcoin, I talk to Marty Bent the host of Tales from the Crypt & Rabbit Hole Recap. We discuss the key events in Bitcoin’s history from the launch of the protocol to the Silk Road and the Scaling Wars.