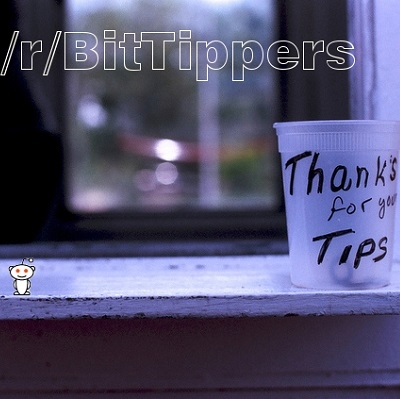 A Community of Bitcoin Tippers

Reddit.com is host to many diverse and fascinating subreddits, created and monitored by the community. The following article discusses one of my favorite subreddits.

My morning routine is to eat a bowl of cereal, make a cup of coffee, and sit and surf my favorite Bitcoin-related sites before work. It was one of these typical mornings sometime last year when I stumbled across a small subreddit called "BitTippers." There were only a handful of subscribers, but it intrigued me. I had discovered the wonder of ChangeTip about a month before and had quickly become obsessed with sending tips to charities, and mostly to strangers on Reddit! The concept of the BitTippers subreddit was to create giveaway contests where could people post comments and you could reward them with a couple of bits worth of Bitcoin via the ChangeTip bot. The BitTipper community was small, but comprised of Bitcoin fans with fun personalities and witty senses of humor.

I've been a redditor for five years and the BitTippers sub rapidly became my favorite hangout replacing the time I spent previously looking at /r/diy or /r/listentothis and even /r/bitcoin! The first task for any new BitTipper is to get some flair, and the initial tag you get is something like "NewGuy010115". The cool thing about the sub is that if and when you host your own Bitcoin giveaway, you get bumped up one level. It creates a nice culture of giving, combined with an element of competition!

The Basic Rules of the Community

BitTipper Rules: No begging posts. Please do not ask for tips. Keep it clean. Don't post anything you wouldn't want your granny to see. BitTippers welcomes you to enter some competitions and giveaways and hopefully you will be tipped some bits. But please remember without people tipping then this sub will soon die so please remember to make your own posts and share the bits with others. - BitTippers Community Rules

The founder of the sub goes by the handle "IvorBigHead." Mr. H, as I call him, managed to grow the community through hard work and some smart decision making, especially when it came to enforcing rules and a code of conduct. I had the recent pleasure of picking his brain about the creation of the community.

A Word from the Founder /u/IvorBigHead

BitTippers was a kind of dumb idea! I had been on reddit a while, somehow stumbled into /r/dogecoin and found I loved the friendliness of the place, the community was great, powered by tipping. Of course dogecoin led me to checkout /r/bitcoin but OMG that sub sucked!!! I was used to coins being a great new innovative idea, fun and excitement. /r/bitcoin was so serious and if you as so much mentioned dogecoin and tipping you were soon informed that dogecoin was full of kids throwing pennies at each other and that if you were going to tip it had to be a minimum of $1, $5 etc. Then I found changetip, not many sub's back then lol, bashco was working on the CSS getting the upvote coin to flip, I got a couple tips :) Fun comes to Bitcoin !! One day for no other reason than I was a little bored, I created a subreddit and found it it was really easy. I started thinking about properly trying to set up a new sub. I wanted a sub that had the "fun" of the good old days of doge combined with a place were new guys could "easily" get some Bitcoin bits to experiment with. So BitTippers was created. To start with it was just me posting, I tried to do a couple a day. A few good people joined but it was not long before it became clear there was a big problem. The same problem doge had, alt accounts, bot accounts, people just commenting 1 word answers to everything marked "giveaway" without a single tip from them. I posted something about it in /r/bitcoin and one guy replied that "BitTippers would only survive for as long as I was prepared to give coin away" it made sense, I had to in courage people to tip, I had to remove the guys who continuly refused to tip. The flair system started :) Bittippers continues to grow, sometimes I do struggle to keep the posts approved and the Flair's updated though, today is a perfect example, I still [have] not updated today's flairs, they will have to wait until tonight!! Not sure what else to say :) - IvorBigHead

I also had the pleasure of chatting with one of the BitTippers community moderators, /u/Not-My-Real-Name-.

BitTippers is a pretty awesome part of reddit. One of my most memorable moments early on was a post by IvorBigHead about tea and biscuits. I’ll let you read the exchange: http://www.reddit.com/r/BitTippers/comments/2inqas/a_dropped_biscuit/ Not only did we have a nice exchange (and I won a few bits), but I went out, bought the tea and biscuits and tried them per his recommendations. It was good too! The big challenge is to come up with contests. The first few are always the hardest. What I have found is that the best/most fun challenges tend to be ones that come up spontaneously. The biggest reward for me is getting to know people I would otherwise never meet. There are some really great people who contribute to the sub. As a moderator it's a pretty easy community to work with. IvorBigHead did a great job setting up the whole thing. Our biggest challenge is trying to prevent alt accounts from overrunning the sub and ruining it. Anytime money is involved people tend to get a little crazy. The “flair” plays a big part in that. If a user takes and takes but doesn't give, they will end up on the wrong end of a ban notice. One of the biggest things that often gets overlooked by many is the technology behind the sub; Bitcoin and Changetip allows us to send money to people we have never met, with little security risk, anywhere in the world. That’s mind boggling for someone who graduated from high school before email was a thing! Cheers! - NotMy

Each week there is a vote for BitTipper of the Week (BTOTW) and the community crowns a new king or queen. Sometimes there are community contributions of bits for the winner, but the amount varies from one week to the next. The wonderful Victoria Van Eyk from ChangeTip recently started sponsoring the weekly prize fund for the BitTipper of the Week contest, and the prize fund is now very respectable each week!

The members of the community are what make it so special. I ran a BitTippers giveaway to see what folks love the most about the sub. Here is a small selection of the many responses.

I like the spirit of competition, the ability to share, and the influences gained from people all over the world in the atmosphere of a small community!

(I love) The camaraderie among the higher-level folks, and the welcome extended to newer BitTippers. Also, /u/ivorbighead's combination of friendliness and no-nonsense attitude.

I love how accepted I feel in the community and how I actually have friends on here that I can talk to.

I like how we formed a community of giving, and hopefully inspire new people to not only do this online, but in everyday life as well.

It's a fun sub that actually shows the good of people, it may not be alot of money given out but the act speaks volumes. It is also a great way for people new to bitcoin to get use the the use of the currency. For instance, from using changtip I set up my bitcoin wallet and have become more familiar with bitcoin.

It's a small enough community that we (sort of) get to know one another, and it's focused on generosity. I love the precise degree to which the mods are tough on people who don't give back (not too tough, not too lenient.) I love seeing what interesting giveaways people come up with. (I only wish I were not out of ideas!) And I love the people who are here.

This sub shows the generosity and fluffy hearts of humans all over the world with a good way to introduce BTC to everyone. I see many who created accounts in BTC just by coming in here accidentally.

I'm sure there are many communitys of Bitcoin tippers that have formed, just like /r/BitTippers, thanks to the "Love Button for the Internet" that ChangeTip has created, but I think it is also the special magic that IvorBigHead and his wonderful team of moderators has created that makes this little-known community of BitTippers so much fun!

Many thanks for reading. If you would like to join the BitTippers community, or just lurk, here is the link: