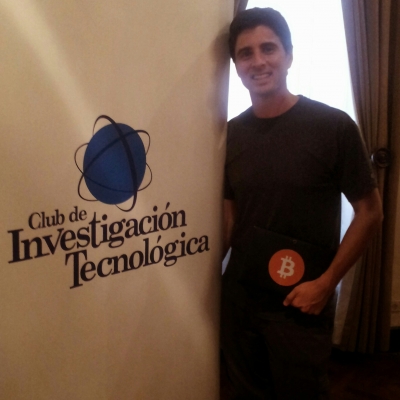 A Bitcoin Talk in Costa Rica

I finished 2014 with so many great experiences in Argentina that the final outcome of educating and assisting in the Bitcoin adoption there didn't disappoint me.

In the town I was living in after the year -- Villa La Angostura, Neuquen (in the Patagonia) -- I had one business adopter, one new bitcoin holder from Buenos Aires, and lots of experience in dealing with skepticism. But the town I lived in was not typical to the norm of that country. It was much slower to change.

During my year there, I wrote an article entitled "Using Bitcoin in Patagonia" for the LTB network, I did an interview with John Barrett on Bitcoins & Gravy, I translated the Spanish section for BC TIP, and even wrote an app review for the Multi Currency Bitcoin POS Android app. I had a quick voice meeting with Adam B. Levine about starting an LTB network Spanish section, and writers even began contacting me to help produce content for it.

What I didn't expect was that a "tico" (Costa Rican) would contact me and ask whether I wanted to give a Bitcoin talk in San Jose, the capital of Costa Rica. I was already going to visit Costa Rica on my way up from South America as I headed to Canada. I accepted the invitation.

Before leaving the South, however, I headed to Gualeguaychu in the Northeast of Argentina, the most famous carnival town in the country. I had one last business there that was interested in hearing more about Bitcoin, a lumber business called La Forestal.

Dany Alos, a volunteer at a small group called Giras Bitcoiners, connected with me before I arrived. The group made their way through the town educating people. They volunteer their efforts going to different towns in different provinces and giving talks on the potential power of Bitcoin for the country and the world. If you're looking to sponsor a Bitcoin cause in Argentina that only looks for donations to help cover the transportation costs, I recommend checking them out.

Back to the business I met with, it went well. But I realized finally that, just like the network layers we don't see when communicating on the internet, I was one of the layers in the Bitcoin adoption process. I may not see businesses adopt, and even less see their potential success in using it. But I am part of that process.

After crossing the country once, I did so again heading West, but this time I crossed over the Andes and into Santiago, Chile. There's an insane markup on flight tickets leaving Buenos Aires. Not so from Santiago. I stayed only a few days and even missed a Mycelium trader who wanted to buy bitcoins from me. But I was just hours from my flight departure and had no need for Chilean pesos anymore.

Just before my flight, I emailed my tico contact, Rodrigo, letting him know that all was still a go on the Bitcoin talk. While I was in flight, my contact was busy organizing it. Once I landed and got to the Pacific coast, I went looking for internet.

Rodrigo had already been hard at work organizing the conference and titled it "Bitcoin – Experiences and Applications in Argentina.” The talk would be the first on Bitcoin in Costa Rica, presented in the "Club de Union." The Club de Union is located in the middle of downtown, between some offices and the main Costa Rican banks. The "Club de Investigaciones Tecnologicas" (Technological Investigation Club) would attend and the talk would be broadcast live as well.

Getting to the conference required me to travel from the Pacific Coast, where I reside, to the center of the country, where the capital is located. Edenia Sistemas sponsored my talk and graciously paid for all my travel costs. The company is top notch. It was the first to accept bitcoins in Costa Rica, and also one of the first to do so in Latin America. They were looking for alternative forms of payment when their main credit card transaction handler failed them due to a misunderstanding. Rodrigo studied the new technology and became an early acceptor and adopter. He was going to give the first presentation at the talk and explain how the Bitcoin blockchain works.

I was to show up at 7:30 on Wednesday, January 21. I was picked up the day before and slept in a beautiful B&B so as to begin on time. The Club de Union building is old and not without its own history. Upon entering one of the halls, I found myself by an audience who was waiting to hear what we had to say. Even some central bankers showed up.

Breakfast was served with fresh fruits and staple foods such as rice and beans. This was quite the reception. I was impressed. It was a great way to give my first talk. My first language is English, but I was giving my talk in Spanish, meaning it was challenging all around for me.

Rodrigo went first, explaining the blockchain in detail, and he did a great job in contrasting the technical with the philosophical. I proceeded with an introduction and then gave five points that I learned while presenting bitcoins to the town in Argentina. I contrasted them with the five steps I went through while trying to help people there learn and adopt the new international currency.

Below, I have translated the main points and a few side ones of the talk I gave. However, Spanish speakers can listen to the whole thing on YouTube. The camera was static, so sometimes we disappear out of frame. The audio isn't always clear. The battery ran out during my talk, which you will notice at one point. And all I showed on the screen were scenic pictures of where I lived, which helped visually with my talk. In any case, it's a recorded piece of history. Now you can view if you want. My talk begins at 1:15:30.

As I head to Canada next to continue my efforts to help people better understand and, where necessary, adopt this new technology, I leave Costa Rica with a more "pura vida" (pure life).

What I learned While Introducing Bitcoin in Argentina

I'll close my talk with some thoughts.

All those supporting Bitcoin are really supporting something bigger, consciously or not. Bitcoin has more to do with global consensus, rather than only the use of one of its applications (such as currency).

Every time we use it, we're trying to use a new form of communication For those of us who use Bitcoin, we're voting with each transaction on whether this is a better way. We're participating in the evolution of a revolution that will bear fruit not only to the Bitcoin network, but more importantly, to the people who use it.

Keep learning from various channels and thinking critically about it as you read both sides of opinions on this new technology. Remember that the way you educate yourself, not how much, will help you even more than what the Bitcoin blockchain technology can bring you. That's what we need in order to do be a better human, a better family, a better community, and a better country for a better world.

Be like a child. Do not lose the "want" to learn and don't be afraid to try new things. Thank you for your attention. Do you have any questions (readers of this article as well)?