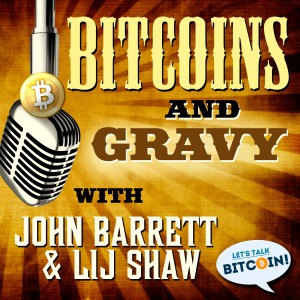 Today is March 17th, 2014 – Welcome to Episode 7 of Bitcoins and Gravy, a weekly show about anything and everything having to do with Bitcoins and the Bitcoin community. We are John Barrett and Lij Shaw – two Bitcoin enthusiasts who love to talk about Bitcoin and share what we learn with you the listener. In the first of two shows from our trip out West to Austin, Texas, we feature some great interviews with some of the great minds and innovators in the Bitcoin Community. First we sit down for a chat with Anthony Di Iorio, Executive Director of the Bitcoin Alliance of Canada. In this information packed interview, Anthony tells us about Bitcoin Decentral, a global hub for disruptive technology innovation in the heart of downtown Toronto. He also shares with us some exciting up and coming tech innovations including the Crypto Kit Wallet (with a little help from Yelp) and the Mantra One – the world’s first Bitcoin Wallet that you can wear like a wristwatch.  And finally, Anthony extends an invitation to everyone in the Bitcoin community to come to Toronto for the Bitcoin Expo 2014. This event takes place April 11th – 13th and among the many great speakers at the Expo, will feature Bitcoins own Andreas Antonopoulos as the Master of Ceremonies! We also get to speak with Kyle Kurbegovitch, the charismatic host of our favorite video podcast, cointalk.ca as he tells us about the Ethereum Project and his involvement in this exciting new technology. Then Lij goes for a run with the Bitcoin runner Jason King of Bitcoin Across America who at the time of the interview was 1132 miles into his run from Miami to San Francisco, California. We continue our interviewing marathon with Tony Gallippi the owner of BitPay about his company’s rapid growth, his partnership with Shopify and some important tips on how to create a Bitcoin Zone in your own town. And finally we had the great pleasure of shaking hands with Andreas Antonopoulos and speaking with him about the importance of the arts in our ever expanding, but tight knit Bitcoin community. CREDITS: Interviews for this episode were edited and produced by Elijah “Lij” Shaw at The Toy Box Studio, East Nashville, TN. Assistant to engineer, Dennon “Bosco” Boscarino. Theme song “Gravy” by the band, Eleanor Roosevelt with Lij on fiddle. Harmonica tracks provided by Billy O. Longstreet. cryptowomen.org facebook.com/cryptowomentwitter.com/cryptowomen Tatianamoroz.com Tatiana on Twitter Tatiana on Facebook Ode to Satoshi lyrics & melody by John Barrett Copyright 2014 RJM Publishing - BMI Nashville. Lead Vocal, Harmony Vocals, Harmonica, Snare Drum: John Barrett Harmony vocals: John Barrett, Connie Sinclair and Lij Shaw Guitar: Jonathan Brown Mandolin: Ben Miller Bass Guitar: Michael Rinne Recorded, Mixed and Mastered at The Toy Box Studio in Nashville, Tennessee Engineer: Lij Shaw. Assistant to engineer: Don “The Don” Bates Produced by John Barrett & Elijah “Lij” Shaw Sovereign BTC with John Bush Questions or Comments? Bitcoins and Gravy Hotline: (615) 208-5198 When you call the Bitcoins and Gravy Hotline, please speak slowly and clearly. Your feedback is valuable to us, so we hope you’ll call with any questions, comments or suggestions about the show. And please let us know whether or not we can use your voice on the show. Email: [email protected] Bitcoins and Gravy Tipping Addresses: Bitcoin: 1ByqQXLTm9JZGSwnfqCCakaifBt3grQkXS Litecoin: LTwaVGVqzKeKbsfXZCz2g4yJxZj7oPspsX