By Brian Cohen and Adam B. Levine

Douglas Feigelson's patent application 20130166455, "Creating And Using Digital Currency" was published by the United States Patent and Trademark Office (USPTO) last Thursday, June 27th. Mr. Feigelson is the founder of BitBills. While the patent application has not been assigned to his company BitBills Inc., it is clearly for the BitBills cold storage concept.

UPDATE 3 7/1/2013: Doug Feigelson: "No comment at this time." Chat Exchange between BitBills and Casacius Physical Bitcoins added to conclusion of the article. Added link to suggested prior art.

Listen to the audio version of this article

Cold storage refers to a method of keeping Bitcoins "off the grid" as a means to keep a user's Bitcoin "secure." If the USPTO grants the patent application it could have an impact on other Bitcoin cold storage concepts such as Canton Becker's BitcoinPaperWallet or even Mike Caldwell's Casascius Coin (here is a great vid of Mike "pressing" coins).

So what does it mean? Bitcoin Consultant John Light elaborates

"...BitBills is attempting to monopolize a very broad product category. It's not unusual for companies to file defensive patents to prevent others from filing first and blocking the use of their idea; it remains to be seen whether this is an offensive measure or purely defensive"

On June 26th, a day before the patent publication, it was announced by BitBills on the Bitcoin Forum that: "We are going to begin producing Bitbills once again. The next generation product will feature a revised design, new denominations, and easier redemption. We will be releasing all the details in the next couple weeks, but I wanted to share this exciting news with you now."

"...after around 2 years, me and llama have been wondering if we should restart Bitbills. We relaunched the site yesterday and haven't seen all too many people visit it. So I wanted to post here to see if anyone would want to buy a few if it were to restart. If we get enough interest, we should be able to get the supplies to restart it as soon as next week. It would be a lot cheaper than the alternatives we know of and we think having a cheap way to give people bitcoins in real life is an important step into mass introduction. We wanted to make denominations of 0.2, 0.5, 1.0 etc. but we could possible do lower amounts...."

The following text is taken from the Abstract of the Patent Application:

The patent claims under "[0076] FIG. 8" that "Bitbills are the first and only Bitcoins in physical form..." 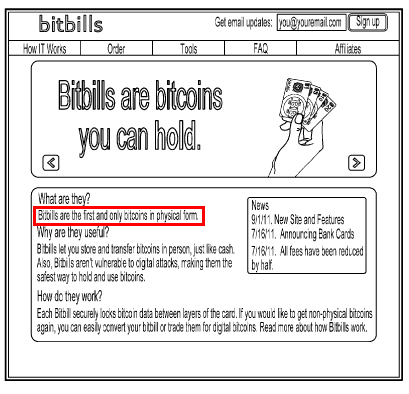 Bitaddress.org, the "Open Source JavaScript Client-Side Bitcoin Wallet Generator" who some refer to as the "grandfather of cold storage" has web cache on the Wayback Machine dating back to September 22, 2011 and the website was registered September 4th 2011 according to a Whois search. BitBills has cache dating back to at least May 11th, 2011 and the website was registered April 20th, 2011.

Curiously, BitBills' original website snapshot lists a "© Qugel LLC." Qugel appears to be a secretive project that may (or may not be) similar to BitSpend and reportedly is (was?) an "arbitrage business listing thousands of items for sale."

In Episode 19 of the Lets Talk Bitcoin Podcast (just released) we received listener mail asking us how to transfer bitcoin to a paper wallet. Security expert and Let's Talk Bitcoin contributor Andreas M. Antonopoulos, also the founder of Safe Paper Wallet explained to the self proclaimed "bitcoin newbie" how cold storage works.

Although cold storage purports to keep user's Bitcoin secure, one should always consider multiple back-ups for their Bitcoin. Hurricane Sandy brought to public light that while bank safe deposit boxes are fireproof, they are not protected against flood. As John Hielscher, of the Herrald Tribune further points out in "Deposit boxes not as safe as you think," "the contents of safe deposit boxes are not covered by their banks or the Federal Deposit Insurance Corp...Banks are not liable for damage to safe deposit boxes caused by storms, flooding, fire or theft."

Coinbase for example keeps their users Bitcoin in cold storage in flash drives and paper wallets:

"...we can safely move about 90% of those funds offline. We do this by taking the sensitive data that would normally reside on our servers (the "private keys" which represent the actual bitcoins) and moving it to USB sticks and paper backups. We then take these to a safe deposit box at an actual bank..."

If issued, the enforcement of this patent could crush the nascent and growing open source ecosystem surrounding paper wallets and cold storage. Charles Hoskinson, Founder of the Bitcoin Education Project has dealt with intellectual property issues for years. He advised this is just the beginning of the journey

"Typically when a patent is issued it isn't a closed and shut case but rather the first step in solidifying a company's IP. A company usually must litigate the patent and win prior to it being considered durable and also this scenario doesn't eliminate the possibility of competing patents with both covering the same use cases.

And it is very much a question, with the original filing in 2011, nearly two years after the public launch of the Bitcoin project.

He continued "Considering that cold storage has been used in the open domain for almost as long as Bitcoin has existed, I would suspect this patent will not survive significant scrutiny, but rather serve the purpose of both enhancing Doug's ability to raise capital and to serve as a barrier to entry for small players unable to afford a patent lawsuit."

BitBills decision to get back into the Bitcoin cold storage business as its patent application was published may signal their desire to enforce their intellectual property rights sometime in the future if their patent is granted. But even if they don't, this patent could be sold now or in the future to a so called "patent troll". Non-producing companies who collect intellectual property as a tool to generate standing for lawsuits aimed at those who do use the patented process or technology.

Canton Becker of BitcoinPaperWallet.com says it's not the patent itself, but its expansive nature.

The fundamental purpose of Bitcoin is to empower individuals to earn, save, and spend money themselves without the aid (or interference) of a third party. The problem with Bitbill's patent application is that it risks placing an overly broad limitation on everyone's ability to store or exchange bitcoins without first seeking permission. If Bitbill intended to patent their particular invention for xray-proof "Bitbill currency", that would be fine by me. But instead they're making a grab for the entire notion of recording digital money in any physical form at all!

To this point the Bitcoin ecosystem has been a relatively collaborative space with some of the strongest, most feature complete offerings are Open Source, like Bitcoin Armory innovating at a fast pace and sharing their innovations with their competitors to maximize the development and adoption of new ideas. The next moves will be telling, BitBills has declined to comment.

We spoke with Mike Caldwell, creator of Casacius coin - He shared with us an exchange he had with one of the co-founders of BitBills years ago that may shed light on their intentions.

**[00:45] Just to get this out of the way, do you believe that you own any sort of legally recognized intellectual property that precludes what I am doing?

[00:47] Would you mind sending me a copy of its registration?

[00:50] What would you like for me to do? Are you essentially asking that I stop producing physical bitcoins?

[00:52] Do you have a patent on the idea of embedding private keys in objects?

[00:52] I performed a quick search and wasn't able to find such a thing

[00:55] So what you are saying is you want me to pay you a fee for making physical bitcoins, just so I understand you correctly

[00:56] You mentioned licensing, so that's how I understood that. If wrong, what do you have in mind?

Mr. Caldwell also suggested that most of the ideas covered by Mr. Feigelson's proposed patent were discussed in public years earlier.

Additional extracts from the patent are below:

"...the digital currency network may be a peer-to-peer network of the kind proposed in a white paper published May 24, 2009, under the name Satoshi Nakamoto, commonly known as "Bitcoin..."

"...the material may be a plastic such as PVC, a wood, a metal a synthetic printing medium, such as the porous polymer film commonly known as "Teslin", or an animal hide... "

"...the hologram may be printed onto foil that the manufacturer may hot stamp onto the token substrate. It is possible for the manufacturer to use the physically encoded data itself as part or all of the token's body..."

"...after the data has been accessed, it should be ensured that no party other than the manufacturer can "repair" or reconstruct the token in such a way as to convince others that the encoded data has never been accessed...."

"... although a third party may be able to replace a latex coating after removing it from a token to reveal the token's data, the manufacturer may thwart this attempt to overcome the protective feature of the token, by using the anti-counterfeiting security measure of micro-printing on top of the latex coating..."

"...although a third party may be able to remove a layer of laminate and the foil wrapper to view the secret data and then replace the wrapper and relaminate the token, the manufacturer may prevent this by printing a security hologram into the foil wrapper which cannot be duplicated and which is destroyed in the process of viewing the secret data..."